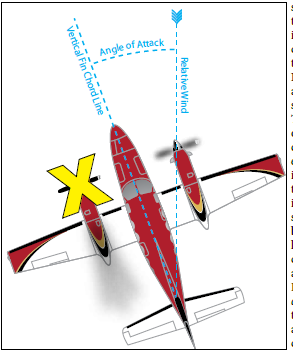 Training for my multi-engine rating years ago was in a Piper Apache. It was a good, inexpensive training aircraft, but it lulled me into a false sense of security about VMC. I thought a VMC rollover was just caused by the torque of the good engine/drag of the failed engine and the lack of rudder authority at low speeds. I thought a VMC demonstration was a pretty benign affair, no big deal. I was wrong.

Fortunately, I got my VMC awakening in a simulator. I was a newly minted multiengine pilot with little multi-engine time. Sawyer Aviation at Sky Harbor in Phoenix had a generic light-twin simulator and I jumped at the chance to get checked out in it, and even flew it solo.

Eventually I decided to see how realistic the simulator was by doing a VMC “demonstration.” I feathered the prop and shut down the left engine. Then I started slowing. I got slow enough I was close to stalling. (This simulator didn’t have a blue or red line on the airspeed indicator.) I did some slow-flight and shallow turns with no hint of loss of control. I even did some shallow banks into the dead engine … nothing. I concluded the simulator wasn’t very realistic.

Having had enough slow flight for the day, I reached up to unfeather the prop and go back to normal flight. As soon as I moved the prop control it did a snap roll quicker than anything I’d ever seen. Now instead of a stall, I was in a single-engine spin. Then—my second mistake of theday—I crammed everything forward instead of bringing the right engine to idle. Well, I got it straightened out before the simulator computer couldn’t handle all the gyrations. By this time, I was certain the simulator wasn’t realistic and assumed the computer was confused. I hoped that after resetting the computer everything would be OK. But on the drive home I realized the simulator was completely realistic. I had been flying below the published VMC, with a feathered prop. When I unfeathered it, the drag of the left prop came into play and there was a very abrupt loss of control. VMC demonstrations are done with a zero thrust and a windmilling prop, not feathered. But wait; there’s more.

Few flight manuals discuss the possibility of a vertical stabilizer/rudder stall. However, one that does, the NATOPS Flight Manual for the C-130T Aircraft has a fin stall discussion. Under the Flight Characteristics section, Paragraph 10.6.1. states: “If the aircraft is maneuvered to abnormally high sideslip angles (15 to 20 degrees), a fin stall resulting in large yawing transients and a loss of directional stability can be encountered. This is an unusual flight maneuver and will not result from power transients, gusts, wake turbulence or execution of normal flight maneuvers.

The fin stall condition is more likely to occur during abnormal amounts of left-rudder-input maneuvers if held until fin buffet occurs. Fin stall can be encountered at all speeds between stall speed and approximately 170 KIAS in all flap configurations with power on. The susceptibility of encountering the fin stall condition is greatest at low speed with high power. Consequently, under these conditions rapid yawing maneuvers can be produced with relatively low abrupt rudder inputs or abnormally high rudder deflections. As the aircraft attitude approaches the critical sideslip angle, heavy vertical fin buffet will develop.”

The NTSB analyzed video of the October 30, 2014 crash of a B200 King Air at Wichita, KS. Their report (CEN15FA034) states:” … during the last second of flight, the airplane had a nose-left sideslip angle of 29 degrees.” The report further states: “It is likely that the pilot applied substantial left rudder input at the end of the flight.” The incorrect rudder input was a major factor in the probable cause. Although the NTSB did not mention a vertical stabilizer stall, such a high sideslip angle suggests that one might have occurred.

Recall that angle of attack is the angle between the relative wind and the airfoil’s chord line from the rear tip of the airfoil to the center of the leading edge. Thus on your wing, lowering flaps will increase the angle of attack. (Technically it moves the entire lift curve up and slightly back.)

Displacing the rudder in the correct direction counteracts the asymmetric thrust, but it also momentarily increases the vertical airfoil’s angle of attack, just like lowering the flaps increases the wing’s angle of attack. What remains to keep you from reaching the critical angle of attack/critical sideslip? Control the adverse yaw quickly. Bank three to five degrees into the good engine to help the rudder authority. Establishing the bank is very important, but don’t overdo it. Overdoing it can lead to excessive sideslip in the opposite direction.

In IMC, you should establish a small bank toward the good engine with approximately half of the ball leaning out of the center bracket toward the good engine. This will reduce sideslip and minimize drag. If you cannot maintain a constant heading with full rudder and aileron, then you must increase airspeed (dive) or reduce the power on the good engine to stop the yaw. It’s not an ideal choice, but it is better than the alternative.

On the wing, the relative wind can be sensed by an angle of attack sensor or lift transducer, many versions of which are available as after-market add-ons. For the vertical stabilizer, a few aircraft (BAE-146 for one) have beta vanes that sense the direction of the relative wind, i.e., sideslip angle. An inexpensive tuft taped to the bottom of the exterior of the windscreen can be a useful alternative to a beta vane. Most sailplanes use a tuft to identify sideslip. The FAA Flight Test guide even allows test pilots to use a “yaw string” (tuft) during VMC flight testing.

More, Better Information
I found it interesting that the material and guidance on VMC is ubiquitous in training references, but is seldom stressed as much as experience suggests it should be. Here are a couple more references I discovered that you might find useful.

Vertical Stabilizer/Rudder Stall There is an excellent description in
a YouTube video “Multi-Engine Training – Part 2 – VMC (Minimum Control Speed)” by Martin Pauly and Doug Rozendaal. Doug discusses a vertical stabilizer/rudder stall and a resulting snap roll. It is an excellent video tutorial. Besides, you will get to look at a beautiful P-51 in the background behind Doug.

Loss of Control Likewise, Harry Horlings at AvioConsult has an excellent YouTube video as well as the paper discussed in the article. He has a more detailed paper, “Control and Performance During Asymmetrical Powered Flight.” He makes an excellent point on the criticality of banking into the good engine—”raise the dead.” The graphs he presented on the effect of bank angle on VMC and effect of weight plus bank angle on VMC were very enlightening. Harry’s information is extremely valuable and should be reviewed by all multi-engine pilots. —BT

Even if the vertical stabilizer/rudder does not stall there are very heavy yawing /rolling forces being developed. These forces, by themselves, can cause loss of control. As flight-test pilot and consultant, Harry Horlings, points out in his paper “Controlling Multi-Engine Airplanes after Engine Failure” it is critical to quickly establish a bank into the good engine. He shows the effect of weight and bank angle on VMC. For his demonstration aircraft (B707/DC-8 type), the published VMC was 95 knots with a three-degree bank into the good engine. In level flight, the actual VMC was 120 knots. With a five-degree bank away from the good engine and into the dead engine, the actual VMC shot up to 169 knots. In that condition, the actual VMC is 74 knots higher than “published.”

For information on how the published VMC is determined, refer to FAA Advisory Circular 23-8C. In Section 4, Controllability and Maneuverability, Paragraph 4.b.(3) points out that bank into the good engine is permitted (all experimental flight test pilots will do this) and Paragraph 4.b.(1) states that near-maximum aileron deflection can be used to obtain the bank angle.

Harry Horlings also has a YouTube video “Airplane Accidents after Engine Failure—Real Value of VMC”. It has a re-created VMC accident in an Embraer 120. What is very interesting is the pilot appeared to be attempting to bank into the good engine but didn’t deflect the yoke far enough to establish the bank. His yoke deflection was approximately the correct angle to establish a five-degree bank if both engines were operating, but it wasn’t near enough with one engine out.

The certification flight test pilots can, and will if necessary, use full aileron to achieve the desired bank angle (between three to five degrees into the good engine). Finally, as Harry points out, flying at published VMC is only good for non-maneuvering flight.

If the yaw rate isn’t corrected, the roll can happen suddenly. This can be deceiving because the yaw can initially start slowly, only to accelerate the longer the yaw rate persists. You must stop the yaw rate quickly to prevent loss of control—the VMC roll.

Unfortunately, muscle memory doesn’t work well to control this situation. Flight training touches the issue but obviously can’t go far enough. In actuality, if it happens at low airspeed, you must be ready to apply much more yoke and rudder deflection/force than expected and be mentally ready to reduce power on the good engine(s).

Having a safe flying career requires continuously thinking “what if” and continuously learning. Before advancing the power for takeoff, think about what is required if the engine decides to quit. Also, keep learning. As Alfred Sheinwold, the famous bridge player once said, “Learn all you can from the mistakes of others. You don’t have time to make them all yourself.”