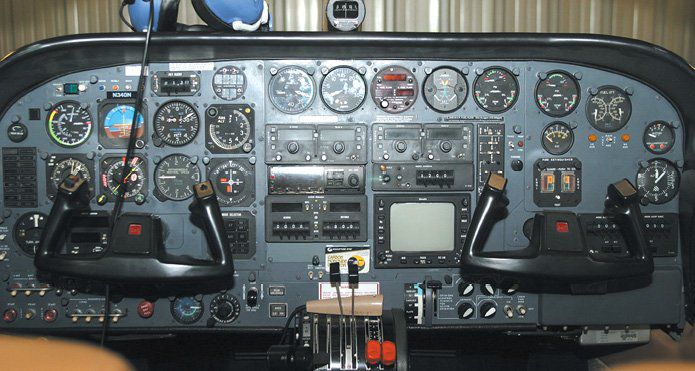 About eight years ago, I undertook a significant avionics upgrade. Before that my 1982 Cessna 340A was nearly original, and most of it still worked. But it was time to join the 20th Century so I undertook to replace just about everything I could. But, that was eight years ago, which is a lifetime in technology advancement today.

I’m now planning another upgrade, as I’m sure many of you are. Some of the options I’m facing, some of the decisions I’m making, are the same as yours. Hopefully, some of my experiences will help you through yours.

“Replace just about everything I could,” eight years ago didn’t include the autopilot since there was no viable autopilot for that model. (S-TEC’s 55 series is certified for the 340, but I believe that an aircraft this complex is a bit much for a rate-based autopilot. You and S-TEC, might not agree, but my conclusion was supported by theory and experience.)

Also, although that upgrade yielded ADS-B Out, it lacked ADS-B Weather (FIS-B). It included Sirius XMWX, but it won’t take too long to offset the hardware cost of getting free FIS-B data in lieu of the subscription cost of Sirius XMWX. (See my Remarks, “Siriusly Messed Up” in June 2018.)

My antique analog autopilot actually is working quite well, but the number of shops that can keep it that way is nearing zero. Add that the newest S-TEC and Garmin autopilots add desirable features and safety, and it was easy to decide to upgrade the autopilot.

We’d defined the project: Replace the autopilot and add FIS-B. Next was deciding which autopilot and how to get FIS-B. The autopilot choice was between new S-TEC and Garmin offerings. I was able to fly both 340s used by the companies to certify their new autopilots and, through preparing a series of articles last year, I concluded that without an existing S-TEC installation, the Garmin GFC 600 would be my choice.

Next, how to get FIS-B? As an early adopter, I trapped myself in a hole. The transponder I had installed was the ADS-B out Garmin GTX 330ES. And the Garmin GTS 820 active traffic system gave me ADS-B traffic (TIS-B) and active traffic. I only lacked FIS-B.

To my knowledge, nobody has made a certified FIS-B-only receiver; instead, it’s part of a package that includes at least TIS-B and usually even ADS-B Out. But, which of those solutions would be the best? I decided on the Garmin GTX 345 as a reasonably easy replacement for my GTX 330ES. (A portable device would be a lot cheaper, but I wanted panel-mount stuff.)

There are a couple UAT (single-purpose remote box) possibilities, but those would require more installation work and would add weight, not reduce it. Plus, my existing transponder has some resale value, so a new transponder became the solution of choice.

I’d had EFIS from a Garmin G500 on the left, and an Aspen Evolution Pro 1000 PFD on the right panel. It was possible to switch between the G500 and the Aspen to drive the autopilot. I want to keep that capability.

Nope, can’t. Technology advancements got me. The chosen GFC 600 autopilot can be hooked up to an Aspen or to a G500. But it does so using completely different interfaces that can’t be switched back and forth.

The bottom line here is that it won’t be possible to control the autopilot from the Aspen. That’s a limitation I’ve decided to live with, although I keep railing against it, playing “What if?” with my shop and getting nowhere. (Full disclosure: The S-TEC 3100 could be installed to switch between the G500 and the Aspen, but other limitations still led me to the Garmin autopilot.)

When I put in the G500, I kept the original analog steam gauges as the requisite backups. Mechanical attitude gyros can be expensive to rebuild every few hundred hours. On recent flights I’ve noticed that mine is getting a bit lazy and is likely to soon roll over and die, but the other steam gauges were fine.

My shop suggested I replace all the standby instruments with an electronic one and suggested the L3 ESI500—a fine instrument—but for much less money, the Garmin G5 was my choice.

With all these changes, my left-side flight panel will get significant changes. I decided to cut new metal, just as I did with the original installation. So, that’s a bit more work to remove everything and redo the panel layout, but the resulting clean look will be worth it.

The original work was done by Executive Autopilots in Sacramento, CA (KSAC). This is a high-end, professional shop with some real talent—not just for installations, but to engineer the kind of odd-ball configurations I want. But during the original work I lived nearby. Now, I’m nearly 800 nautical miles away, and the cost of flying the plane there increases the project costs.

A shop near me has a good reputation for quality avionics installations. Their bid came in a good deal under the bid from Executive Autopilots, but it’s essentially a one-man shop and that raises some potential longer-term concerns. I also have an acquaintance who flies a 340 and he recently had the GFC 600 autopilot installed by his local shop, also a high-end shop with a superb reputation and all kinds of capabilities. I had them bid it and their bid came in competitive with Executive Autopilots.

Ultimately, I chose Executive Autopilots primarily for the reason that they’d done the original work and I figured it would be easier and cleaner for them to add to it. I did pressure them on price a bit, but in the end price wasn’t my primary consideration.

I started on this in late October last year. The typical shop lead time then was about three months. By mid-March when I got all the questions answered and all the decisions made, the lead time had jumped to six months.

With so much of the GA fleet yet to install ADS-B Out, I assumed the bulk of their work was triggered by ADS-B compliance. “Not so,” said Mike David, owner of Executive Autopilots. “Like your project, most of our work is on aircraft that are already compliant and want more upgrades, or are complete panel refits. Very few of our jobs are just an ADS-B Out installation.” So, not only am I competing with the ADS-B procrastinators, I’m also competing for shop time with a lot of major projects.

The moral of this last bit is that with rapid avionics advancements, it’s unlikely that the pace at the better shops will decline much in January as we’ve all previously predicted.

I still have a few minor details to work out with Executive Autopilots, but that should be done shortly. Then, it’s simply a matter of waiting for the shop.

We’ll document this installation carefully and I’ll report on it again when it’s complete or possibly even while it’s in progress. Meanwhile, if anything major comes up that changes any important decisions, I’ll let you know with an update.

I hope my path down the road to what will amount to major work taking up to two months is helpful to those of you who plan significant projects of your own. The best advice I have is to investigate all the options, all the nuances, and make sure what you want is what the shop can and will give you. Also, of course, commit to a single shop and get on their schedule well before you “need” the project complete. Along the way, if there’s any guidance I can provide, just send me an e-mail.

Frank Bowlin, an electrical engineer in a long-past life, can be his own worst enemy when trying to design and spec complex projects. He has yet to fully endorse the KISS method.