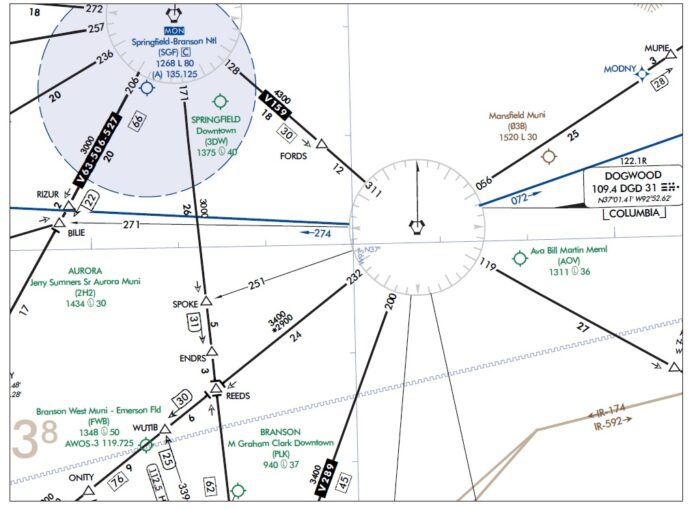 You should know by now that ground-based navaids and approaches are disappearing. While some associated procedures remain for backup and alternate availability at smaller airports, most by now have been replaced by easier, safer, more convenient RNAV approaches to each runway. But here’s the rub: A lot of these still use course reversals, a single MDA, and a basic runway. That means you’ve still gotta know how to manage traditional, non-precision maneuvers, no matter what your GPS can do.

Committed to a long-overdue business meeting in Springfield, Missouri, you plan a flight to KSGF in your WAAS-equipped Arrow. This is a Class C airport with plenty of approaches to multiple runways, meaning there’s little concern over the weather by your ETA of noon local.

That’s great, but you also want a convenient alternate to the southeast, closer to where you need to be. Hundreds of airports, while offering IFR accessibility using RNAV, don’t have anything more than the most basic approaches. You’ll soon find that the best options mostly consist of those basic procedures into little airports.

At any rate, you need to file an alternate per 14 CFR §91.169. You, the Piper and the destination can certainly handle the conditions, but can the alternates? You’ll need ceilings/visibility of 800-2 (There’s nothing allowing the 600-2 mins for precision approaches.).

Start with Springfield Downtown (3DW), just a few miles to the east of KSGF. Too close, unfortunately; it’ll have the same weather as Springfield, 600-3. And the charts for Springfield Downtown say “Alternate NA,” so that’s out. A bit further southeast is Ava, Missouri (KAOV). However, you can’t use that one either as an alternate. Why? See the Chart User’s Guide: “Alternate minimums are not authorized due to unmonitored facility or absence of weather reporting service.” Neither has its own weather station; Ava borrows the AWOS for Branson (BBG), 36NM to the southwest.

You keep scanning the chart for other options and quickly see that “NA” seems to be the pattern with most of the airports surrounding Springfield in the southeast and southwest quadrants. Aurora Muni: Alternate NA. Branson West Muni: Alternate NA. Monnet Regional: Maybe; the alternates notes say NA if the weather reporting is inop.

But that’s a much longer drive from where you’re staying. Other airports have no approaches at all. Further out, the prospects improve, with Branson or Joplin okay for alternate filing. But you don’t want to actually end up way out there, and of course you’d be tighter on fuel after one or two missed approaches, not to mention further delays getting to your final destination.

Time to get creative. You might file to 3DW, use KSGF as the alternate. Can you file to a destination even if current or reported weather might be absent or below minimums? Sure, as long as you’ve got a solid alternate (that you can divert to after a weather update). As for Springfield Downtown, the RNAV (GPS)-A, a circling-only approach to an MDA of 2060 (685) feet, has a final course lined up with Runway 11. However, that’s right at the anticipated cloud base and you’d rather not take the time and fuel for an approach there when Springfield’s main airport is so close.

So it’d be smarter to file to Springfield with Joplin as the alternate. That’s more than 50 miles to the west, but the weather there is better, it qualifies, and you wouldn’t actually need to drive there. From the east, you’d plan to assess the conditions for 3DW and just land at SGF if need be. Using the expected clearance from Olive Branch to Springfield-Branson National, plan on KUMGE V159 FORDS. That should put Springfield Downtown just off the right wing, also allowing you to observe its conditions from overhead and make a decision about continuing on to KSGF or, if it should happen to clear up considerably, get an amended clearance to 3DW.

In fact, you can also visually check conditions around Ava as it’s the last airport you’ll overfly coming into the Springfield airspace. While they’re big picture by design, there’s great information in the graphical ceiling forecasts provided for 3, 6, 9, 12, 15 and 18 hours out, covering state-by-state. Along with airport weather stations you do find (settling for Branson, Mountain Home, and West Plains), it’s a safe bet that ceilings at 3DW will be no lower than what’s at Springfield. And it could possibly break up a bit to the south/southeast, according to the imagery.

Six thousand feet in cruise puts you above the clouds while avoiding stronger winds aloft above that altitude. From that perch flying along V159, you can see the small city of Ava just off the right wing through a hole in the clouds; it’s already a broken ceiling there.

But the holes close up over the next few miles, at which point weather deteriorates into a darker undercast below. You think to inquire about the latest at KSGF, and the special report from the tower says it’s down to 300-1. Downtown’s surely out of the picture, and Springfield’s ILS 14 is a must. That’s mighty close to minimums of 1517-¾ though.

Seems odd to consider the smaller, more remote airport, but Ava is looking better as the clouds start to break up. You decide to hold over the Dogwood VOR, which is on the airway and just ahead. Holds are not your forté, but you know it’s the best thing to do now: Save miles flown and avoid burning too much into the two hours’ remaining fuel. You can slow down as much as you’d like. 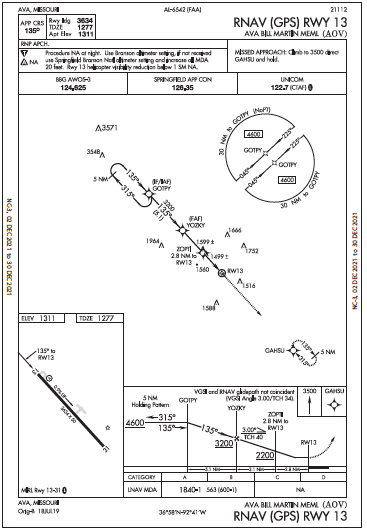 ATC kindly issues a direct-entry, standard hold southeast of DGD right on the airway. Using the basic but steady autopilot, you regroup, consume a candy bar and come up with a new plan. If it improves to a higher, scattered cloud layer at Ava, you can land there. While you won’t have an exact reading on the height of the clouds, scattered means it’ll be more likely you could fly the RNAV 13 approach and be visual well above the MDA. The RNAV 13, you note, is LNAV-only and goes to 1840-1 to a 3634-foot runway, so there’s nothing above Category B, which, by the way, is 91-120 knots. Resist the fatigue-fueled urge to rush and get the Arrow to a reasonable 115 MPH/100 knots on approach.

From over Dogwood, it’ll be a hold-in-lieu-of-procedure-turn to start the approach. You’ve had your share of holds, how about vectors? Negative. Approach has been too busy directing all the aircraft on missed approaches and delaying vectors at KSGF. But you did get a prompt clearance for the approach via GOTPY, and you confirmed the course reversal was expected.

Not too bad with the autopilot; it made a parallel entry and promptly activated the inbound final at GOTPY. You got a visual on the airport at 3200 feet over YOZKY and had ample time to cancel IFR more than five miles out. Turns out you were the only one (and the only one small enough) to squeeze into KAOV. Now you’ll need to wait a while for a ride from Ava, but note how you never did think about that while working on this diversion plan, which might not have occurred to you without that hold.

Elaine Kauh is a CFII in eastern Wisconsin. After her unsuccessful “Save the Localizer” campaign at a local airport, she launched a “no more NDBs” drive that so far has kept them at bay.