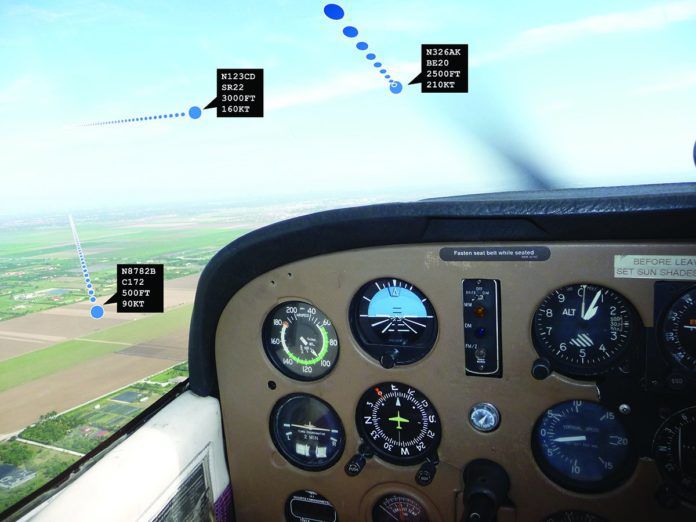 Many air traffic control procedures can seem complex at times, but most are based on simple concepts. Take traffic calls, for instance. They’re driven by basic self-preservation. If a controller can get a pilot to see another nearby aircraft, that pilot should avoid the other aircraft and make the controller’s job easier and the skies safer—common sense in action.

Good ATC traffic calls get pilots looking in the right direction with plenty of time to spot their quarry. Naturally, though, the FAA and its rules mean that these calls can come in a few different flavors, depending on what type of ATC facility is working your flight.

No matter the facility type—whether it’s tower, approach, or center—all proper traffic calls begin with foresight. The best way to resolve a situation is to fix it before it becomes a problem, right?

Imagine you’re standing on a street corner. Two bicyclists are pedaling fast towards the intersection from crossing streets, a few hundred feet apart and closing. They don’t see each other. Do you wait until they’re about to hit before you try to signal them or yell out a warning? Or, do you start well before they reach the intersection?

Warn them too late, and now they`re panicking and swerving, potentially losing control, crashing into someone or something. If you give them enough time, they can calmly adjust their speed or path to miss the other guy.

That foresight is one of the most critical skills for a new ATC trainee to learn. They need to recognize not just airplanes that are in direct conflict, but traffic that will be in conflict without appropriate action. Once the need for action is established, they need to correctly demonstrate timing and the use of accurate, descriptive phraseology.

It’s rare in my experience that a brand new trainee will walk in the door and be able to do this. When a trainee isn’t seeing a conflict, it’s my job as an instructor to take over, say what the trainee isn’t saying, and fill in the pilots on the situation. Training, practice, and perhaps a few scares make the importance of good traffic calls abundantly clear.

From there, the type of traffic call depends on the equipment a controller has at his disposal, as well as his facility type and his own training. Generally speaking, the more gear being used, the more complex and precise the traffic call.

In The Mind’s Eye

Let’s start with a facility that has, well, no equipment aside from windows and binoculars: a control tower without a radar display. Without a radar scope, the controllers can’t tell an aircraft’s exact location and closure rate regarding obstacles and other traffic. It’s all done by “eyeballing” the traffic they can see, and relying heavily on position reporting from aircraft they can’t see.

It’s a mental game, where the controller has to correlate the aircraft he can’t see with those in his immediate visual vicinity. Imagine three aircraft arriving at a fictional airport: “Tower, Cessna Centurion 3AB is six miles southeast, descending out of 2000, straight-in for Runway three-two.” “Tower, helicopter MediAir Six, four miles east at 1500, transitioning to the southwest.” “Tower, Skyhawk 62Z is abeam the left downwind numbers for Runway three-two, requesting the option.”

Time to visualize the conflicts. The Centurion is on a six mile straight-in final for Runway 32. The medical helicopter is east of the airport, southwest-bound, which will take him across the 32 final. The Skyhawk is in sight from the tower, approaching left base for 32. All of these aircraft will soon be in close proximity to one another.

Given he has no radar to pinpoint everyone’s location, the controller must abide by FAA Order 7110.65 3-1-6 (b): “TRAFFIC INFORMATION… Describe the relative position of traffic in an easy to understand manner, such as ‘to your right’ or ‘ahead of you.'” So, the controller will give general instructions, starting with the most critical one: the Centurion and helicopter, whose flight paths cross. “Centurion 3AB,” he says, “traffic ahead and to your right, helicopter, southwest-bound.” To MediAir Six, he advises, “Traffic ahead and to your left, Cessna Centurion inbound to runway 32, passing left to right.”

Let’s say they spot each other. “MediAir Six, pass behind that traffic.” Done. The helo’s no longer a factor, but the Centurion needs a little extra info. The controller’s also been watching the Skyhawk, who—by now—is already turning final. “Centurion 3AB, the helicopter will pass behind you. You’re number two, following a Skyhawk turning left base-to-final.”

If the Centurion and MediAir don’t see one another, what could ATC do? Given the vagaries of positions, the controller could institute an absolute restriction for the helo. For instance, “MediAir Six, remain north of the Runway 32 final until advised.” That keeps the helo off the final and away from the Centurion and Skyhawk until they establish visual contact. Even with limited information, there are still opportunities for the controller to, well, control.

Now, imagine this tower gets a funding increase. Along with new chairs and a new microwave—the old one still smelled of last year’s “cheese incident”—they get a brand new radar display fed from the nearby Approach Control, so they see what the radar guys see.

Before we get too excited, there’s something to consider: These are still regular tower controllers who are not radar-trained, and—aside from the radar data feed—are not affiliated with Approach. They must adhere to 10-5-3 (c) in FAA Order JO 7210.3Z – Facility Operation and Administration. This collection of ATC facility “do’s and don’ts” states that at towers not combined with a radar approach facility, the radar display “must be used only as an aid to assist controllers in visually locating aircraft or in determining their spatial relationship to known geographical points.”

As a standalone tower crew, they can look at the display, but they can’t use it to its full potential, just like a non-instrument-rated pilot can fly an IFR-certified airplane as long as he doesn’t file and fly an IFR flight plan in it. Without proper certification of both people and equipment, the display cannot be used to do things like radar-identify aircraft, issue vectors, or make fancy radar traffic calls (more on those in a minute). Therefore, even with their new toy, these controllers must continue using vague “ahead and to your right” traffic calls.

You might be thinking, “So, what’s the point?” A while ago, I got checked out in a Garmin G1000 Cessna 172, after only flying 1970’s six-pack editions. On my first practice area run, I was amazed by the Traffic Information System that showed aircraft around me on the moving map display. No longer were they abstract, occasional position reports. When Cherokee 998 reported “practicing stalls over the race track at 3000” I could see him there, in real time. It provided clarity.

The tower controller now uses that positional clarity—and his traffic’s relation to major geographic points depicted on his scope—to his advantage. “Centurion 3AB,” he can say, “traffic ahead and to your right, helicopter, southwest-bound, over the cement plant.” Then he can say, “MediAir Six, traffic, Centurion, ahead and to your left, inbound to Runway 32, just over the suspension bridge.” The pilots are now given a major landmark to help refine their search. ATC can also analyze their closure rate and angle to see if there’s going to be a problem.

Let’s leave our little tower behind and drive over to the local Approach control, located on a Class C airport. This particular facility is what we call an “up/down,” a control tower combined with a TRACON. Its controllers work both up in the glass office, overseeing their airport, and down in the radar room, working the airspace around that airport.

Since they alternate between the two, these controllers and the equipment they use are fully radar-certified. When they’re up in the tower, they can still use the vague VFR traffic calls like any other tower, but can also use the far more informative radar traffic call. When they’re working radar downstairs, they can only use the radar traffic call. Pure radar controllers at centers and stand-alone approach controls naturally only use radar calls.

Whereas a VFR tower traffic call is a bit freeform, a radar traffic call has a prescribed flow to it. After call sign and “traffic”, we state the target’s azimuth in terms of the 12-hour clock. This gets the pilot looking in the right direction. The target’s distance (in miles) and direction of movement follow. Lastly, if known, we include the specific aircraft type and verified altitude.

Beyond the Malibu, however, there’s another target, squawking VFR and not talking to any ATC facility. Its aircraft type is a mystery. It is showing an altitude, but we have no idea if the stranger set his altimeter properly, since he hasn’t reported it to ATC. “MediAir Six, additional traffic, ten o’clock, five miles, eastbound, type unknown. Altitude indicates one thousand, eight hundred, unverified.”

If that VFR target is weaving all over the place, is of unknown type, and is not showing an altitude, we let the pilot know what we don’t know. “MediAir Six, additional traffic, ten o’clock, five miles, maneuvering, type and altitude unknown.” The guy could be at MediAir’s altitude, or five thousand feet above him. We don’t know, so we want him looking out.

Controllers must work with the tools, rules, and information that is available to them. Whether tower-vague or radar-specific, the humble traffic call is one of ATC’s greatest tools for keeping their traffic safe and aware of what’s going on in the not-so-big sky around them.

Tarrance Kramer does his best to get his traffic to see each other, even occasionally wishing he could hop into the cockpit and point it out.