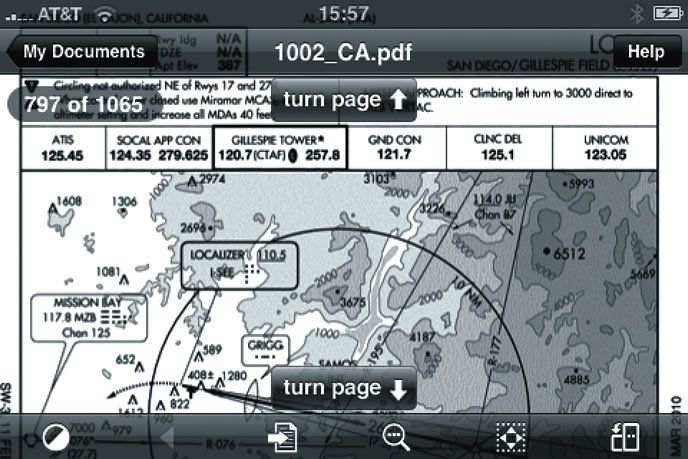 Apps for the iPhone (and iPod Touch) can do everything from get a weather briefing to viewing charts and terminal procedures (a.k.a., approach plates). While the prospect of replacing several pounds of paper charts with a small, reliable, lightweight device is certainly attractive, there are issues to consider; it’s just not that simple.

Here’s an honest rundown on just how easy (or hard) it is to use an iPhone for some common aviation tasks.

There are a few gotchas with an iPhone that you might not notice on the ground, but definitely matter in the cockpit. Unlike larger computers, the iPhone’s operating system does not support multi-tasking: You may have a bunch of cool apps, but switching between them is time-consuming and clumsy. This may be addressed in a future iPhone OS release, but it ain’t there yet. Don’t expect to use multiple apps during high-workload or time-sensitive phases of flight—like on an approach.

The iPhone generates considerable radio frequency energy. I’ve seen a 15-degree error at a VOR ground checkpoint that was traced to an iPhone that hadn’t been put into airplane mode. If you doubt the veracity of this claim, try this simple test: Find an old CRT monitor, hold an iPhone near it and observe how the display becomes distorted.

Airplane mode (which turns off the iPhone’s transceiver) addresses this and complies with a prohibition on using cell phones in flight. Many pilots know that FAR 91.21 allows the use of portable electronic devices that the pilot-in-command has determined won’t interfere with communications or navigation but they don’t know that 47 CFR 22.925 (the FCC’s realm) specifically prohibits the operation of cell phones in airborne aircraft.

Unfortunately, airplane mode also severs any WiFi connection and—more importantly for some aviation apps—disables the built-in GPS. Rumor has it that Apple may address this in a future iPhone release.

For flights of two to three hours the iPhone’s battery life should be adequate. With airplane mode enabled, the iPhone’s battery may last six hours, depending on your brightness and other display settings. But if you’re planning long flying days and have a power-plug, you may want a power adapter to keep your iPhone charged.

Lastly, there’s the usual caveat that flying with electronic versions of important charts and data on a single electronic device should give us pause. Having at least some paper charts as a backup seems prudent.

The iPhone at its Best

ForeFlight Mobile 3 lets you store information about the aircraft you fly, save routes, get pre-flight briefings and file flight plans. You can view animated weather radar and satellite photos and use DUATS to get a full weather briefing and to file flight plans. It also caches airport information, including terminal procedures, allowing you to access them in airplane mode. ForeFlight is available for a subscription price of $24.99 for three months or $74.99 for a year. Users upgrading from the previous version get a year’s subscription for $49.99.

WingX is a full-featured app that lets you access DUATS, file flight plans, get airport information, view all NACO terminal procedures, and look at TFRs. It also provides E6B calculations and even includes the text of important aviation regulations and advisory circulars. What makes WingX unique is its color, moving-map terrain display, though this requires the iPhone’s GPS to be enabled and that’s problematic when airborne. WingX sells for $99.99.

Garmin’s Pilot My-Cast provides many features for obtaining weather, radar and satellite images, PIREPs and the like. Pilot My-Cast lets you enter frequently used routes, obtain a weather briefing for a selected route and file flight plans, then view weather forecasts, observations, PIREPs and TFRs. You can access airport information in the form of AOPA’s Airport Directory, but there’s no support for terminal procedures, VFR sectionals, or IFR en route charts. Pilot My-Cast doesn’t cache any data and needs a network connection (3G at a minimum) to function. Pilot My-Cast is available by subscription for $9.99 per month and works on a variety of cell phones.

Without a GPS for position, the number-one use for the iPhone in the air is probably for charts. Several apps squeeze a fat wad of sectionals, en route charts and terminal procedures inside your tiny iPhone. With a good mounting system and the screen rotated to landscape, the charts are surprisingly usable. But looking up charts can be complicated and time-consuming, so be careful about head-down time.

SkyCharts costs $9.99 and lets you cache as many terminal procedures and charts as your iPhone will hold. With the iPhone’s GPS turned on, SkyCharts locates your position and with a network connection it will display surface weather information. To locate a desired airport, use the usual iPhone gestures, then tap on the airport’s symbol to bring up the airport information and terminal procedures. The maps work in portrait or landscape mode. Scrolling can be a bit slow on older iPhone models and the maps themselves are a bit hard to read on the small screen, but this could become a really useful app when released for the larger iPad.

ForeFlight Mobile 3 lets you display VFR and IFR charts as well as display terminal procedures by airport, though the interface is a bit clumsy when airborne. The charts are automatically cached so you can access them in airplane mode.

While WingX doesn’t do sectional or en route charts, it does let you quickly locate and display terminal procedures by airport identifier, even while in airplane mode. The interface is quick and easy to use, conveniently grouping procedures by approach, departure, and arrival.

The most economical terminal-procedures solution is the $0.99 PDF reader called GoodReader combined with PDFs downloaded from www.PDFPlates.com or www.Nacomatic.com. GoodReader lets you bookmark frequently used procedures for fast access, zoom in and out with the usual iPhone gestures, and even offers a night mode that dims the display. Both PDFPlates and Nacomatic request a small donation in exchange for providing terminal procedures, making this the low-cost alternative for pilots on a budget.

On the downside, locating procedures with GoodReader, even when you know the airport ID, can be time-consuming and frustrating. However, the quality of the GoodReader’s document rendering is excellent.

Outside of an aircraft, an iPhone may be a pilot’s best friend (especially for pre-flight briefings), but inside an aircraft the small screen isn’t that easy to read and the device can only do one task at a time. The choice between legal/safe airplane mode or having GPS position means it can’t replace an aviation GPS for now.

But if you already own an iPhone, there are apps that can make your flying life easier. A good mounting system is worth the trouble if you’re using the iPhone regularly in your cockpit. Battery life and reliability seem to be as good as, or better than, other portable electronic devices. Once the iPad arrives, we may finally have the ideal, mass-produced, display device for aviation. Until then, your iPhone has a place in the cockpit, as a charting and approach-plate backup if nothing else.

John Ewing is a full-time flight instructor and techno-geek in the Bay Area. He blogs about aviation at aviationmentor.blogspot.com.