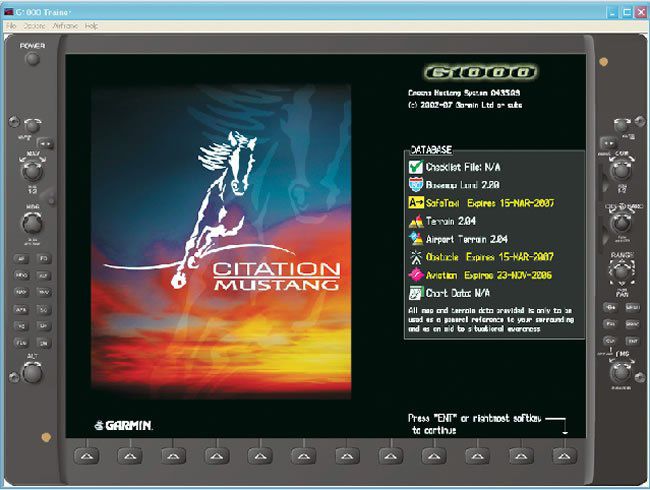 It’s a pretty new idea to prep for the avionics of an aircraft before beginning training. However, the advent of the G1000 has made it near insanity for a pilot to begin a type course in a Garmin-equipped plane without a good knowledge of G1000 operations. Most of the initial failures in the Mustang course were not for inability to fly a jet, but rather for inability to master the G1000.

Thankfully, there’s no excuse to show up unprepared. Garmin sells an inexpensive PC simulator of the G1000, selectable by aircraft type, which is a fantastic training tool. Paired with a G1000-experienced CFI, a pilot can master all the functions of the Garmin before ever stepping into a simulator or airplane. There are also several online or DVD-based G1000 training options. The advantage of training with a CFI is that it’s far easier for an instructor to probe weaknesses and test how much has truly sunk in. It’s all too easy to deceive yourself into thinking you have the Garmin down, only to be flummoxed in the sim.

If you haven’t been flying an airplane with a sophisticated autopilot, using the AP of your new plane could trip you up more than you might think. While hand-flying skill is critical, the majority of the flying conducted in the sim will be on the AP. “Great, what could be easier?” you may be thinking. Not so fast, partner.

Not being able to properly use an AP will cause things to fall apart quicker than you can imagine. Turning the wrong way on an approach, flying the plane into a stall, descending through MDA—these are all things I have seen the AP do in the sim as a frantic pilot attempts to remedy the situation.

Most APs have more in common than not, so getting some training time in a modern GA simulator or flight training device on AP operations will be priceless if coming out of an airplane with only a basic AP. Understand the basics of NAV versus APR mode, NAV intercepts, ALT capture events, and the tricks of glideslope capture. If you are to be flying a G1000-equipped plane, get some time with the Garmin GFC 700 autopilot. They all work the same.