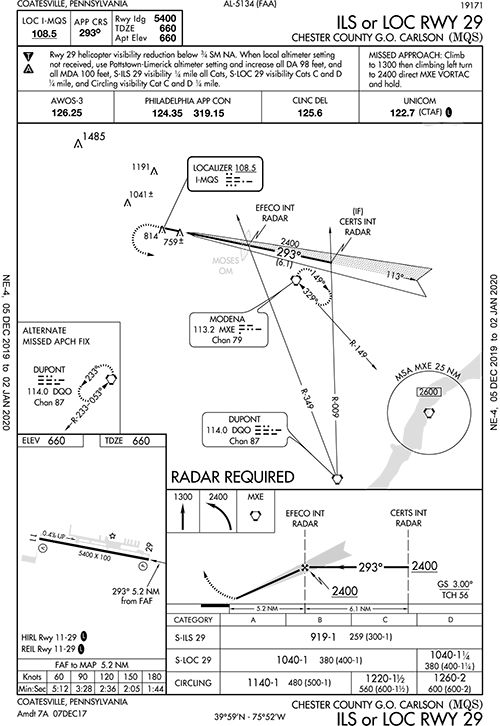 When was the last time you actually had to fly a missed approach due to weather at or below minimums? I’m talking for real, in the airplane, not just in practice or in the simulator. If you have, it was probably one of those common climb-and-turn procedures, or just a climbout on runway heading until ATC gave you a new vector to come back around. Sometimes, though, a published missed approach procedure can be, well, unusual. And if it’s not something you want to do, fine—just be sure to get something else in the plan.

It’s a down-to-minimums day in Pennsylvania’s Brandywine Valley just west of Philadelphia. You’re headed there in search of convenient options to park your airplane for a couple days without enduring big-airport stuff like congestion, fees, and lengthy queues. After settling on Chester County G.O. Carlson airport in Coatesville as your destination and picking Reading, PA as the alternate, the only open end is whether the 300-foot ceilings are enough to get into Coatesville. Or not…

Almost time to head to the airport, so will it be the ILS or RNAV (LPV) Runway 29 at KMQS? At first glance, it’s a tossup—minimums are 919-1 and 938-1, respectively. If appropriately equipped—as you are today—you tend to default to GPS procedures, but you’ll brief both and use the ILS as a backup to your basic but WAAS-enabled GPS navigator.

On the LPV approach notes, there’s a backup altimeter setting in case Chester County’s AWOS doesn’t have it. If you use that, the DA goes up 98 feet, the MDA 100 feet, plus ¼ mile more on the visibility for most categories.

The alternate weather station is at Heritage Field. Where the devil is that? Unfortunately, frequencies or even airport identifiers aren’t conveniently provided in the chart notes. So to be truly prepped before leaving home, take a minute to hunt around the en-route chart or look it up online. Heritage Field is KPTW to the northeast in Pottstown. The ASOS is 119.425. Duly noted.

From the south, you’ll plan on flying the approach from GOWZO, fly to CERTS and pick up the LPV glideslope at EFECO. There’s a visual descent point one mile from the runway, telling you there’s not much to worry about for obstacles. However, conditions are such that the odds aren’t in favor of breaking out by then.

Maybe the ILS will offer something to make it the preferred choice. The chart notes again refer to a backup altimeter setting, this one at Pottstown-Limerick. Where is that, and why would it be a different airport from the one listed on the other chart? Aha! Search for it and discover that it’s the same airport in Pottstown, just using the airport’s former name. In this case, the DA would also go up 98 feet. Likewise, the visibility requirement increases another ¼ mile.

At any rate, 19 feet lower on the DA isn’t much of an advantage over the LPV. Meanwhile, this approach has the same intermediate fix, CERTS, using a radial from the DQO VORTAC. EFECO is the same glideslope intercept point and is also marked by the MOSES outer marker and the 349-degree radial from DuPont. This all makes for an easy backup and a quick switch in case of a GPS failure, as long as you 1) tell ATC about the failure, and ensure that they have radar contact to fulfill the requirements of this approach, and 2) change the needle from magenta to green. Depending on the navigator and where you end up changing from LPV to ILS, you might need to change to localizer/ILS mode yourself and check that the final course is dialed in.

Now for the other contingency plan. Both the LPV and ILS use the Modena VORTAC for the missed approach holding fix. If the comm radios went dead, here’s where you would hold until you figure out how to get to Reading, since you prefer an overcast of 800 feet, not 300. But the missed procedures at Coatesville aren’t at all similar. The RNAV’s missed draws a unique path, something resembling, technically speaking, a quadrangular polygon, but with an open side.

Pop the fixes into a route planner and it’s a 30.6-mile journey to the VORTAC, including a 13-mile leg from HOBRA. All that left turning to draw the giant polygon in the sky gets you less than 10 NM from the field and about 2.5 miles south of the final approach path. This’d take at least 15 minutes in your 120-knot airplane to return to EFECO, not including one or more trips around the holding pattern. By contrast, fly the published missed on the ILS and it’s only 9.7 miles from the airport, just a turn direct to MXE. Now you’re waffling again and thinking the ILS is the better choice, comm or nav issues notwithstanding.

Or, perhaps you could simply fly the LPV and plan the ILS’s missed approach (if needed) by requesting ahead? Sure, alternate missed procedures happen all the time. So you can request the RNAV 29 as soon as you get on the local Philly Approach frequency, and get another missed procedure using what’s published on the ILS. (Even better, you can legally use GPS to hold at MXE, even if holding over a VOR or if you’d used LOC mode for the ILS). Good plan.

Now, with a likely missed in store, check on the legal landing requirements. Under §91.175, we must have the flight visibility at or above what’s published for the approach plus one of the “runway environment” items in sight. It’s one mile visibility for either IAP and the 300-foot overcast is right around the minimums. Assuming you’re on the LPV, when can you descend below 938 feet?

Recall that if you have the approach lights in sight, you’re allowed to descend all the way to 100 feet above the TDZE (or 760 feet at MQS) “using the approach lights as a reference unless the red terminating bars or the red side row bars are also distinctly visible and identifiable.” Sounds promising, but for one little problem: No such lights here. Again, check online for airport information before you head out; approach charts show only the kinds of lighting present, and never illustrate markings.

As required for an ILS, Runway 29 has “precision” markings in the form of centerline, aiming point, touchdown zone, side stripes and white threshold bars—eight, to be precise, indicating a 100-foot-wide runway. Did you get all of that? (See the AIM Chapter 2). It also has, per the chart, a 4-light PAPI and runway end identifier lights, but that’s it. This limits your §91.175 options, so if you don’t see the runway lights, PAPI or white stripes—as is the case here—you’re on the missed at the official DA.

Turns out that after flying a perfect LPV it wasn’t even close, so there will be no second try today. Good thing you planned a shorter route and an alternate with better weather, an ILS plus an LPV 36, and (yay!) runway alignment lights to boot.