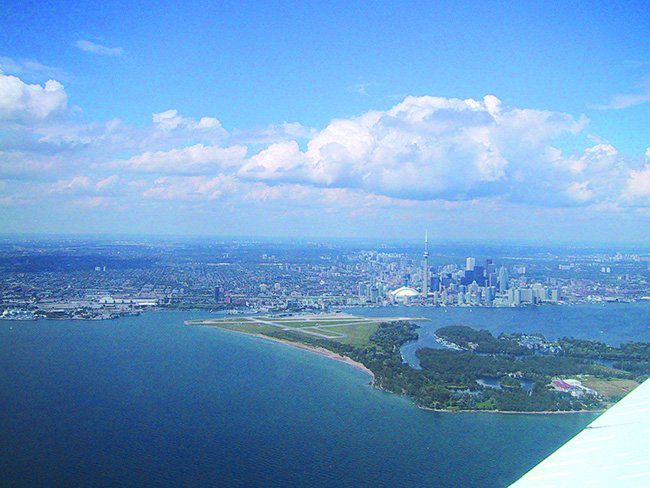 If you’re wondering if you should schedule a removal of your old ADF along with that Apollo LORAN you’re yanking and tanking at the next annual, Perhaps you should consider a trip to Canada. NDB navigation is more alive up there than down here. If you don’t yet have that IFR-certified GPS, you may even have a chance to dust off those NDB approach skills lurking in the back of your IFR mind.

Let’s push the limits of credulity (just a bit) and say you’re bound for Toronto City (CYTZ) on a low, gray day with avionics that were top-of-line when Watergate was still a news item. You got a great deal on a hotel weekend on Priceline and you don’t want to miss it.

Toronto Approach gives you the bad news that the localizer for Runway 08 at Toronto City is OTS. The two RNAV (GPS) approaches are beyond your panel’s capabilities, so it’s time for the peculiar torture rarely seen south of the 49th parallel: The NDB DME approach.

Approach hints that you might want to divert all of nine miles to Toronto Pearson or Downsview, but your handheld Magellan 315 gives you confidence—hey, the monochrome moving map even depicts the airports—so you press on undaunted and ask for vectors to final. Vectors mean you won’t be flying the DME arc, which can actually be easier with an ADF needle than a pair of VORs. But you will need your DME to identify both the stepdown at BERIG and the MAP at ALKUB.

Approach drops you down to 1500 feet and you decide to brief this plate in earnest. You tune the NDB at Gibraltar Point and get a good ID but a wandering needle. Probably should have cleaned some oil off that belly antenna before the flight. Next you go to manually tune the DME and realize you have no idea what frequency would be paired with the NDB. Oh, the DME is off the Toronto City localizer. But wait, that’s out of service.

Then you remember the DME is on a paired frequency, so you dial the frequency in Nav 1 and give it a go. It shows up as 15 miles out but there’s no ident. Is this legit? You decide to manually dial 110.15 in your DME and ID it that way and, after waiting a bit longer than you’re used to for a station ID, you get a code that sounds about right.

A couple other items that catch your attention are the plate notes about vessels up to 363 feet adjacent the runways, which may partly account for the 760-foot MDA—a significant 508 feet above the airport. But then your realize you’re bore-sighted on downtown Toronto. That 2055-foot obstruction is the CN Tower. Maybe it’s worth a close study of the missed.

The MAP at ALKUB is 1.4 miles from the NDB, but 2.2 miles from the airport. It’s a bit of a haul at low altitude to get to the pavement. Circling is forbidden on the city side of the field, but with over two miles to set up, you should be able to position for any runway you might need.

If you don’t see the airport at ALKUB, it’s a climbing left turn to track 175 degrees back to the St. Catherines NDB. Jepp doesn’t give you this distance on the chart but it’s over 20 miles. Good thing you’ve got that Magellan, given how your ADF is performing at a distance. But then, you start thinking about all the cold water you’re already flying over and how much you want to be on the ground and get a plate ready for Toronto Pearson just in case.

What about a late missed? The airport comes in sight at the MAP and then you lose it on the way in? It’d be a climb and hard turn with some nasty potential conflicts with obstructions. That approach at Pearson is looking better and better. The ADF needle is pointing 20 degrees left of the nose, but your heading is 350—wait, when was the last time you synced that up with the compass? Well the GPS shows a track of 330, so it can’t be too far off, can it?

You’re two miles from BERIG, cleared for the approach and handed off to Tower. Tower tells you to report the field in sight. Now 500 feet above the waves but with nothing but mist in front, you’re starting to seriously question the wisdom of this endeavor.

Just before the DME ticks down to 1.4, you see runway lights out of the haze. Straight-in for 33 is requiring a lot of crab to stay on course, so a right base to 4000 feet of Runway 08 starts looking better. Besides, if you end up going missed approach and back into the muck, you’ll at least be out over the water. Note to self: Check the climb gradients for all runways before shooting the approach.

With Customs cleared and the plane buttoned up, you catch a ride into town and ask about the weather. The cabbie gives a grunt and says it’s always like this in the spring. Must be why those hotel tickets were such a screaming deal.