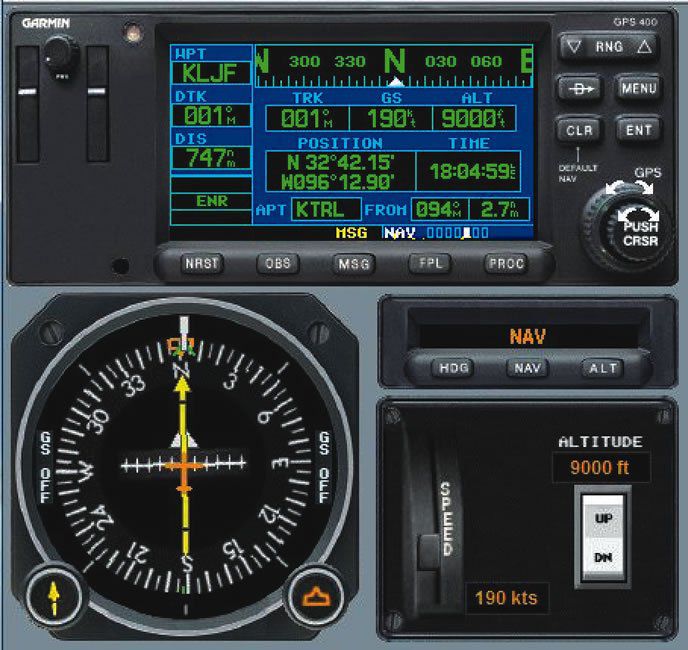 Face it: We love our GPS. Many of us fly with two of ’em installed, plus a portable for good measure. It’s arguably the most revolutionary advance in navigation, automation and IFR capabilities. Satellites now allow the most basic aircraft to navigate with amazing precision.

However, there are caveats for modern RNAV pilots. We’ve become overly dependent on GPS when it comes to the cornerstone of IFR navigation—situational awareness (SA). That means many of us are losing touch with the basic skill of knowing where we are in our heads, not just on the moving map. Also, like any piece of equipment, we need to use GPS as a tool, not a crutch, especially when a trip changes drastically due to weather, systems malfunctions, and the like.

Situational awareness is the key to true instrument proficiency. It’s about knowing your position and overall situation at all times. That includes a look-ahead element to know what awaits you in your piece of airspace. If you don’t know, you’re just a slave to the GPS route shown on the display and the data that drives it.

If your flight is humming along nicely with no issues, you’re none the wiser. You get cleared direct, ATC vectors you towards the final approach course, you center the needle and head inbound—piece of cake. If the aircraft is working perfectly and everything goes as planned, your situational awareness skills aren’t tested and indeed aren’t missed. Most flights work out this way, as well they should. But we often get too relaxed in the comfy lull of the routine. It happens; it’s human nature.

Have you grown accustomed to feeding an iPad-generated flight plan into the large panel map and just watching the little airplane fly across the map? If so, hours of this have made your brain relax to the point that it’s not exercising the SA skills you worked so hard to learn in the first place. The map eliminates the need to think about where you are and where you’re going. Then when you have a sudden, unexpected problem, even if everything keeps working, you must suddenly think through the added complexities of that flight. You’ve made a difficult operation that much more challenging, adding a huge increase in risk.

Here’s an easy way to tell if you’ve become GPS-complacent. Just fly an IFR route and approach without having a display in front of you and gauge your competence and confidence levels. You can fly Victor or Jet airways (You remember VORs, right?) using just the radials or even fly an RNAV route without using direct and without the moving map.

Can you comfortably fly your flight plan using just the charts and the navigation needles? Can you make a rough calculation of your groundspeed and estimate your ETA to the next fix without a GPS readout? Or, randomly ask yourself (better yet, get a passenger to ask you) to identify your situation. If you can’t say, for instance, “We’re about 30 miles west of the RightHere VOR, tracking a course of 123 degrees with a left crosswind requiring a heading of 118 degrees,” perhaps you’re just not paying close enough attention.

If you were able to pull these off, how comfortable would you be if your clearance changed or you had to deviate? If you were somewhat uneasy during this exercise or you weren’t able to stay on top of things, it’s time to wake up those SA skills again and keep them active. GPS has the ability to give us much more detailed and precise information than we ever got before, so that’s to everyone’s advantage. Just don’t abdicate your pilot-in-command responsibilities while using GPS.

Overemphasizing the map at the expense of other instruments has become a common issue. As an offshoot to situational-awareness complacency, the tendency to skip monitoring other systems arises, especially when on autopilot. It’s easy to punch everything in and let the airplane cruise along while we fiddle with the music. Meanwhile, subtle indications like dropping oil pressure or a rising CHT go unnoticed. The GPS says it’s 2:34 to our destination, but we don’t bother to check our fuel burn to see if we will get there with the hour reserve we planned.

But if we don’t realize we’ll only get there with only 30-minutes reserve, we aren’t prompted to find out that the reason is a significant shift in the weather that might close our destination altogether. If we haven’t done that, we won’t start looking for alternates. And, if we’re not looking for alternates, we might find ourselves at the destination that’s well below minimums with only 30 minutes fuel in the tanks. That lack of SA could turn a minor inconvenience into a full-blown emergency.

Another procedural problem is that things requiring hands-on action can fall by the wayside. For example, on climbout, you’ll raise the gear, raise the flaps, trim for the climb and fly the departure heading. But fixating on the GPS early on to redraw the magenta line has caused many a pilot to forget, for instance, that the boost pump or the landing lights are still on.

Perhaps it’s because GPS and the layout of digital panels have led to the disuse of instrument scans. It’s easy to shift the main focus from the flight instruments to the map during instrument flight. This not only breaks a pilot’s scan, it’s a sign the pilot isn’t confident to read the needle without the map for interpretation. The needle requires the brain to think about what’s going on, while the map depicts it visually.

For instance, when cleared to fly direct to a fix to intercept an airway, followed by a 30-degree heading change to stay on that airway, we’ll ensure we’ve got the leg active on the flight plan and start heading there. We need to turn our attention to the HSI at that point and confirm that the needle is over to the right (’cause that’s where the fix is in relation to us). Then, as we get closer, the needle should start sliding towards the center. When it’s a couple of dots out, we turn left to intercept the airway and center the needle—all pretty basic. But the little airplane flying towards the fix on the map tends to draw our gaze away from the needle to check our position when we really should be keeping our eyes on the HSI and scanning the instruments that surround it.

Think about that a moment. To really fly the airplane by primarily referencing the map, to get adequate precision you need to be at such a small scale that the real advantage of the map—supplemental situational awareness—is lost. The conventional instruments are for navigation, not the map.

It Can Happen To You

GPS signals do get lost. Entire screens do blank out. The latest example I saw of this was in a nearly-new SR22T in which the PFD suddenly zapped into oblivion during flight. By the time the pilot landed, that expensive high-tech digital display looked no better than an old analog TV that was tuned between channels. Fortunately, this failure occurred on a short VFR flight, so there was no danger. But had it been in IMC, the pilot would have needed reversionary mode, wiping out the main map display in order to keep the flight instruments going. If the thought of flying around in the soup without your MFD gives you the chills, it’s time to rethink how you use GPS.

The best way to avoid the complacency trap is to be systematic in the way you fly. Rather than sitting back, remain actively involved in the operations. Emphasize the GPS data rather than the map to monitor the aircraft heading, and check it against groundspeed and ground track. Check the ETA and decide whether you need to make any adjustments. For each leg, go ahead and pore over the map to make mental notes of suitable airports and their meteorological conditions should you have to divert.

If something catastrophic occurs, like a complete engine failure, you’re already halfway prepared by knowing where to turn without any searching around. And by the way, if you’re having such a problem, the last thing you need to worry about is putting a route into the GPS. Fly the airplane, point yourself in the appropriate direction and talk to ATC (aviate, navigate, communicate).

If you find you can’t keep your eyes off the map, turn the MFD page to something else—your flight plan perhaps—until you actually need it back. In most systems the flight data will still be present on another part of the panel. Especially during the first 1500 feet or so of initial climbout, the map isn’t nearly as important as, say, the engine data on that G1000.

Checklists are great for actively monitoring how things are going. Once you complete the cruise checklist, continue to scan the flight data, the weather and aircraft systems at least every 15 or 20 minutes. If everything is in the green, go back to the GPS data until it’s time to make the rounds again. When setting up for an approach, make sure you have everything dialed in properly and use the flight instruments and flight data, not the map, to fly the approach.

Notice that by having a methodical approach in the cockpit, you’re using the GPS system to its full capacity—everything from distance and groundspeed to enroute time, plus the CDI—while maintaining your own situational awareness. You’re running through aircraft condition checks without neglecting any component, and you’re prepared for the unexpected. Should it ever happen, you’ll be ready.

Elaine Kauh is a CFII in eastern Wisconsin. She loves her GPS but not as much as her morning cappuccino.