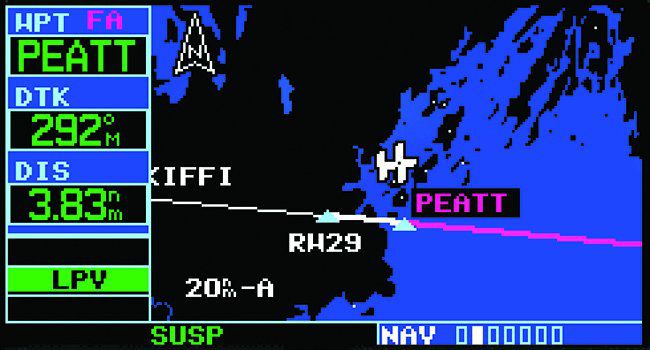 When Dorothy and her gang finally met the All-Powerful Oz, he turned out to be a snake-oil salesman from Kansas working busily out of sight behind the curtain. Your IFR-certified GPS is similar in a way, with the magic a result of engineers toiling under 1000+ pages of Minimum Operation Performance specs (although they probably did come from Kansas).
You should never need to look behind the curtain and check up on your GPS. But it is possible to get the box to stumble if you try hard enough.

A Matter of Integrity
Most of what you could do that might cause problems happens in the terminal and approach environment. But to get a handle on why, let’s back up to en route navigation. Whether you’ve got a TSO-C129 (non-WAAS) or TSO-C145A/TSO-C146A (WAAS) GPS, it’s doing ongoing integrity checks as you fly.

Without WAAS, the box does the best it can to compare information coming from the satellite constellation and decide how certain it is about your position. If it’s pretty certain (the exact details of “pretty certain” are too long, boring and irrelevant for our purposes) then you get GPS guidance with a full-scale CDI deflection of five miles (unless you set it lower). This integrity is usually provided by Receiver Autonomous Integrity Monitoring, better known as RAIM. If the receiver gets nervous that it might have your location wrong, you get a warning and loss of navigation data.

Some non-WAAS boxes have a more sophisticated system called Fault Detection and Exclusion (FDE). This system can actually figure out which satellite is sending bad information and exclude its data from the computation. So long as there’s still enough good data, the pilot flies on blissfully unaware of the quality control happening behind the scenes.

All WAAS boxes must have FDE. They also have another data source: the WAAS signal providing them with integrity information directly.

Authoritative and extensive integrity data (as opposed to self-derived data) is at the heart of why WAAS boxes can guarantee greater accuracy. By default, WAAS boxes show two-mile full-scale deflection of the CDI in the en route environment.

Things Get Busy
The GPS gets a bit busier when you get within 30 miles of your destination. That 30 miles determines the edge of the “terminal area,” where CDI scaling smoothly transitions to one mile. Here’s something that can happen that you’ve probably never noticed: Perhaps you have navigation to Big-City Metro and its ILS but the weather is good enough for the LNAV approach to Hometown Municipal, 15 miles closer. If you load and activate the approach for the newer field, the CDI re-centers—because it is now navigating directly to the IAF—but it also jumps to one-mile scaling because you’re suddenly within 30 miles of the destination. Hold that thought because it comes up again in a moment.

When you get within two miles of the FAF, and the GPS believes you’re inbound to that FAF, it spends several busy milliseconds analyzing what the satellite constellation will look like over the next several minutes (while you will be flying the approach). If it’s a WAAS navigator, it also decides what level of accuracy it can guarantee and which minimums it will advise you to use (LPV, LNAV, etc.). It also begins scaling from one-mile sensitivity to 0.3-miles of sensitivity, which it must be at by the time you cross the FAF inbound.

Here’s where life can get interesting. Some (including old issues of this magazine) advocated going direct to the FAF as a technique in certain situations with an IFR GPS. The problem with this is that the box won’t run those calculations or rescale the CDI until you cross the FAF. This means an instant rescaling to 0.3 miles—and a possible sudden jump in the CDI and subsequent autopilot disconnect—and no way to see which minimums to use until you’re inside the FAF. Not a good plan.

The same thing can happen if you get or ask for a super-tight turn to final. The box won’t run the calculation until you’re inbound to the FAF. Approaching at 90 degrees and making a sudden turn might yield the same result as direct to the FAF if you hadn’t activated the approach manually. You don’t necessarily need all two miles, but anything less is shortcutting the process and might show in a fast rescaling of the CDI.

The FAF also may be a fly-over waypoint for the approach to sequence — no turn anticipation is allowed. If you miss the target by 50 feet, the box should sequence correctly. Not so if you cut it off by half a mile. You could force the issue with activating the leg from FAF to the missed approach waypoint, but that’s not how the system is supposed to work.

WAAS units have the option of changing their mind about an approach up to 60 seconds before you cross the FAF. They can tell you to downgrade the approach and use LNAV minimums instead. Once you’re within 60 seconds of the FAF, any loss of integrity below the set threshold will result in instructions to fly a missed approach.

Some equipment offers a few extra tricks. WAAS units can give limited guidance on the missed for climbs on a heading to a specific altitude before turning toward the missed-approach holding point. Previous to this, you’d have to be careful not to unsuspend waypoint sequencing until you completed the climb or you’d get guidance direct to the hold regardless of what terrain or obstacles might be in the way.

Some units can also provide a ded reckoning mode for 30 seconds of guidance during a GPS position loss. But that won’t be offered on a GPS approach.

Why does all this matter? As the Scarecrow found out back in Oz, knowledge isn’t a bad proxy for having a brain. Better understanding as to what happens behind the curtain means you’re just that much more likely to safely find your way back to Kansas.