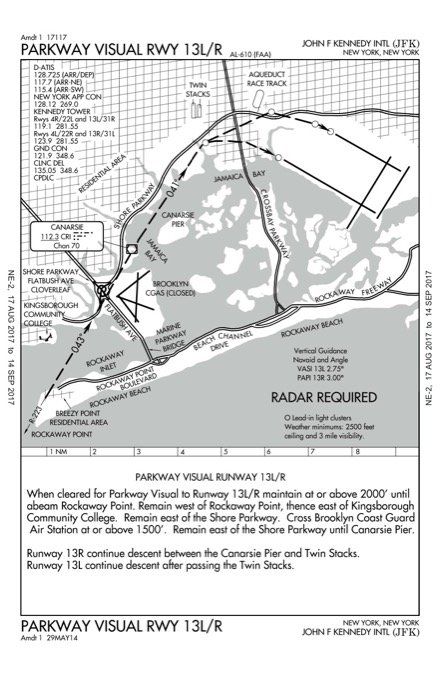 Recently, as is customary when I give an instrument proficiency check (IPC), before the flight I review en route and approach charts with the pilot. While randomly going through the Florida approach book, we saw the North Bay Visual RWY 18L charted visual flight procedure (CVFP) at the St Pete-Clearwater airport (KPIE) and a couple questions came up.

Can a pilot in a Cessna 172 fly a CVFP? Yes, but approaching KPIE from the north, the Cessna will most probably be in TAMPA Class B airspace (depending on the altitude) and hopefully will have a VFR clearance through the Class B. Chances are that vectors will be given to stay west of KTPA, possibly outside the Class B. This might be a great excuse for the proverbial $300 hamburger. Of course, if you’re entering Tampa Class B you need to talk with Tampa Approach—it is a busy airspace.

Could you get the CVFP? Maybe not, because the procedure is mainly designed for jet aircraft. Won’t hurt to ask.

Charted Visual Flight Procedures (CVFP) are not approach procedures. Hence the name “flight procedures” As the name implies they are visual procedures with a twist. Why would there be a charted procedure instead of, “Cleared for the visual approach” that we typically get at the end of an IFR flight?

The AIM (5-4-24) defines CVFPs as “charted visual approaches established for environmental/noise considerations, and/or when necessary for the safety and efficiency of air traffic operations. The approach charts depict prominent landmarks, courses, and recommended altitudes to specific runways. CVFPs are designated to be used primarily for turbojet aircraft.”

At the start of the jet age, it became evident that minimum VMC of 1000-3 was simply insufficient for jet aircraft to fly visual approaches in marginal conditions at major airports. Additionally, noise abatement had to be considered. Since CVFPs are not instrument approaches, they do not have missed approach segments; if an aircraft cannot continue the approach, missed approaches will be handled as go-arounds by ATC.

CVFPs are mainly found at larger airports with a lot of jet traffic. But, not all large airports have CVFPs, and CVFPs can exist at smaller airports. An operating control tower is necessary and navaid information might be depicted for supplemental navigational guidance. Weather minimums are based on minimum vectoring altitudes rather than the published altitudes along the flight track.

While not a CVFP, the VOR or GPS Runway 13L/13R commonly called the “Canarsie Approach” has its own history, and by all accounts was the precursor of the Parkway Visual procedure that follows a similar path. Approach minimums are 800-2 and of course it has a published missed approach segment.

A friend, who is a retired B767 captain, mentioned that the Canarsie approach was developed in the late 50s when B707s and DC8s began operating at Idlewild (IDL, before it was renamed Kennedy International, JFK, in 1963). Before the approach, when winds favored Runways 13, for noise abatement reasons the standard procedure was to fly the ILS to Runway 4R then make a long circle to land on RWY 13L at the 800-foot circling minimums—a dicey proposition at best in the early jetliners. After two years of studies and demonstration flights, the Canarsie approach became reality.

There are a few peculiarities with this approach. Since the title names the runways, you’d expect the approach and landing to be straight in or at least within 30 degrees. Actually, the missed approach point is about 90 degrees to the runaways. Plus, two runways are involved and it is not a side-step maneuver. Finally, there is a relatively long visual segment that uses lead-in lights. The procedure is unusable if the lead-in lights are inoperative.

The Parkway Visual procedure was developed as a VMC alternative to the “Canarsie” approach. In addition to radar, it requires weather at least 2500-3. Reviewing the chart, even though the Canarsie VOR (CRI) provides some track guidance, it’s obvious that the pilot flying this procedure must be intimately familiar with the ground points—Breezy Point, Kingsborough Community College, Shore Parkway and the twin stacks.

The Light Visual to Boston Logan’s Runway 33L is one of my favorites since it’s really a tour of Boston Harbor with some historical landmarks thrown in. Radar is required and the weather minimums are 3000-5. Clearly it was designed to avoid the noise-sensitive area south of the course (Hull, Cohasset and Nantasket Beach). When weather is worse than the minimums and Runway 33L is in use, the course of the ILS or LOC RWY 33L approach flies right over these areas.

Tracking inbound on the BOS 128-degree radial, the flight path flies over three waypoints: MYNOT at 11.5 DME and LYHTT at 4.8 DME. It then has you on a 275-degree course to WORRN on the Runway 33L localizer. Since this is not an IAP, the procedure is not likely to be in your navigator’s database; you would need to manually enter the waypoints into your flight plan or simply fly it using OBS mode from BOS.

The current Minot’s Ledge Lighthouse (MYNOT) dates to 1860 and is literally on top of a small rocky outcropping. The original Boston Light lighthouse (LYHTT) dates to 1716 and played a role in the Revolutionary War. Lastly, the pentagonal star-shaped Fort Warren (WORRN) takes up most of Georges Island and was built in the mid-1800s.

What is unique about this procedure is that the ground tracks are defined by a VOR radial and then by the Runway 33L localizer. Additionally, when the visibility is right at 5 miles, you cannot see Boston Light from Minot’s since the distance is about 8.6 miles (7.5 NM). While the visual landmarks are very distinct, they are augmented by waypoints to help when visibility is relatively low but still above minimums.

I mentioned in the article that it would enhance safety if the FAA charted more visual flight procedures for smaller general aviation airports. However, Garmin has introduced visual procedures to many runways into the GTN navigators and the G1000. Since the navigators have WAAS GPS, Garmin felt comfortable providing vertical and lateral guidance to runways, in the same fashion as surveyed, charted, and certified LNAV/VNAV and LPV approaches.

These provide suggested lateral guidance to the runway and sometimes, depending on obstacles, vertical guidance. This should add to safety, especially at airports lacking approach lights and VASIs at night.

Users must realize that these are not FAA-approved procedures; they are provided only for supplemental navigation and situational awareness purposes. Garmin makes it clear that these are not approved approaches and there might be obstacles.

These visual approaches are provided in the latest software update in the GTNs, V6.30. Note that even with the latest software in your G1000, the feature might not be available because it is up to the OEMs, not Garmin, to make this feature available. Reliable sources indicated that neither Piper nor Cirrus is offering the approaches.

Let’s come back to look at the CVFP that started this whole exploration. With no offense to St. Pete-Clearwater Airport, it is not a major airline airport. Weather requirements for the North Bay Visual RWY 18L are 2100-3. The altitudes are recommended and are based on noise abatement procedures. Most of the flight path is over Tampa Bay rather than Clearwater. The procedure is not authorized at night because it might be difficult to see the ground references such as the Causeway Bridge. Interestingly, currently there is no Runway 18R at KPIE so you’re left to wonder when the FAA will update the procedure to just Runway 18.

Next time you’re flying your piston-GA aircraft into the Tampa / St. Pete area, talk to Tampa Approach and ask for a practice: North Bay Visual RWY 18. It is a nice flight. If however, you are not familiar with the area, I would suggest looking at Google Earth to identify the ground references. In fact, as part of pre-flight planning when I fly to non-familiar airports, I also study Google Earth for distinguishing landmarks.

While probably not a high priority for the FAA, especially given the emphasis in developing new GPS approaches and NEXTGEN, I think that charting visual procedures for busy general aviation airports for piston airplanes increases safety with their clear tracks in visual conditions for IFR traffic. Such procedures could, of course, also be used by VFR traffic, better fitting everyone into the same flow.

Separately, the latest software (v6.30) for the Garmin GTN Nav/Com/GPS navigators does allow users to load “visual” approaches. These visual approaches are not instrument approaches; they’re just mathematical constructs that don’t guarantee clearance from … anything. (See the sidebar for more information.) Nonetheless, this additional guidance for a visual should add to safety, especially approaching an airport at night without approach lights and VASIs.