Home Briefing Briefing: January 2020
Print
Email
Facebook
Twitter
The final report on the first of two catastrophic crashes that led to the grounding of the Boeing 737 MAX was released by Indonesias air safety board in late October and it painted a damning picture of missteps at every stage leading up to the downing of Lion Air 610 in the Java Sea. From poor basic design, to pilot error and faulty design, the report listed at least nine causal factors for the crash, which killed all 189 people on board. From what we know, there are nine things that contributed to this accident, Indonesian air accident investigator Nurcahyo Utomo said in a news conference announcing the reports findings. If one of the nine hadnt occurred, maybe the accident wouldnt have occurred, he added. One of those factors was the fact that the pilots didnt react the way Boeing designers predicted pilots would respond to emergencies such as the faulty angle of attack data triggering the Maneuvering Characteristics Augmentation System (MCAS) into thwarting their attempts to keep the aircraft from diving into the ocean.
To continue reading this article or issue you must be a paid subscriber 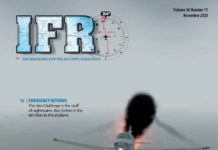