If you are interested in becoming a banker (BANKR) or perhaps a finance controller (CONTR) (not be confused with an ATC controller), a much cheaper alternative to a Harvard MBA is to head to Charlotte/Douglas International Airport (KCLT) in Charlotte, North Carolina on the BANKR TWO ARRIVAL. Along the way, you will learn about DEBBTs and CRDETs, as well as, BLNCE sheets and CHKNG accounts.

However, if you decide to go to the dark side, there is the option of becoming a bank robber (ROBRR) and if you need additional cash for the upcoming engine overhaul, an old fashioned STKUP is always an alternative. Or even going as far as setting up a PONZE scheme to buy a new Piper M600.

On the first day of 2020 I was flying from Phoenix Sky Harbor to San Francisco International Airport. There were bad rides everywhere and too many aircraft missing radio calls from the LA Center controller who had already mentioned several times how he didn’t have time for missed clearances, when I heard the following exchange:

Air Canada: “We’re looking at that but it seems a little backed up at the moment. Anything better?”

LA Center: “FL320 and below, and thanks for appreciating the sarcasm.”

Before Chicago’s O’Hare airport joined the rest of ICAO in the early 90s by identifying all their taxiways with alphanumeric designations, they used local street names and cute references for various taxiways and surface features. They had Wolf Road, North-South, Stub, and Cargo taxiways, and a Penalty Box (holding area).

Suffering from an often-severe winter and heavy use, many of these taxiways were in less than pristine condition. In fact, the rough condition of some was a common joke among pilots and controllers alike.

Late one night while taxing to Runway 22L passing the Stub, we heard, “Ground, TWA 123 would like to report an unusually smooth spot on the Cargo taxiway.”

Instantly the controller replied, “TWA 123 we will have a crew take care of that in the morning.”

A while ago I had the following exchange with Kansas City Center as I first checked in.

Center: “425 Delta Delta, so your plan is to fly up there through all that

Me: (wondering what Center was looking at that I’m not seeing) “Affirmative. 425 Delta Delta.”

I had a smooth ride all the way home. Go figure.

Do you remember the “Learn to fly here” photo that showed the sign but unfortunately a plane stuck in a tree in the background?

While travelling in New Zealand recently, I noticed a billboard in Te Anau for scenic helicopter flights whose slogan was “Become part of the scenery.” That’s perhaps not the best wording, given Kobe Bryant’s unfortunate demise. 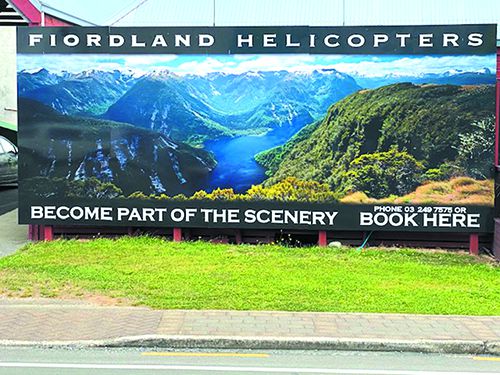