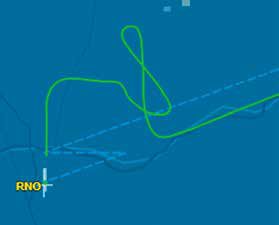 While the Star Wars movie series has ended (spanning 42 years), it is alive and well at the Hartsfield-Jackson Atlanta International Airport (KATL) on the JEDII TWO ARRIVAL (RNAV).

There are up to 11 Star Wars movies, depending on how you count. The original movie (1977) was Star Wars Episode IV: A New Hope (NEWHP), which was actually the fourth installment of the series. The Jedi (JJEDI) were the leaders and peacekeepers of the galaxy, and perhaps the most famous one was Luke Skywalker (SKWKR). His sister, Princess Leia Organa (LAYUH), was fearless in the battlefield and was attracted to unsavory individuals.

Then there are the hairy Ewoks (EEWOK), hunter gatherers who looked like small teddy bears and lived in arboreal dwellings. We also have the Wookiees (WOKIE) who are tall and strong humanoid aliens. The most famous Wookiee is Chewbacca or Chewie (CHWEE), a rated co-pilot of the starship Millennium Falcon (MELNM). Chewie is lovable and grunts in pleasure and anger as he flies (sound familiar?).

However, the commander of this starship is nowhere to be found on the Atlanta Arrival—the scoundrel and smuggler, yet great leader of the Rebel Alliance, Han Solo (Harrison Ford).

Recently my wife and I flew to Harris Ranch (California) for breakfast. On the return flight, I dropped my wife off at Seirra Sky Park Airport before flying to Madera Municipal Airport, our home base.

Madera Municipal is about 20 miles north of Sierra Sky Park. In winter we usually have ground fog in the morning in the San Joaquin Valley. It just so happened that on this particular day the visibility was better than 10 miles with no fog except in the Madera area. The Madera weather was 700 overcast and 2 miles visibility.

After departing Seirra Sky Park, I called Fresno Approach for an IFR clearance and an RNAV 30 approach into Madera.

Fresno Approach advised me that I would be number two to follow a Mooney for the same approach.

As the Mooney approached the FAF, approach cleared him for a frequency change to the Madera CTAF and instructing the pilot to contact Approach after the aircraft landed.

I was then cleared to GEVRY, an IF, for the RNAV 30 approach. I was also advised that I would not be cleared for the approach until the Mooney reported on the ground at Madera.

As I approached the GEVRY IF, in my Cessna 172M, I was given the one request all Cessna 172 pilot /owners yearn to hear:

I was cleared for the approach one mile before the FAF of HATXI.

Thanks to Fresno Approach and the Mooney I got the one call all Cessna pilot/owners yearn to hear, “…reduce speed, number two to follow traffic…”

While flying cross country from South Carolina to California we planned a stop in Reno, Nevada.

I complained to the controller when he released me for the visual approach 7000 feet above and just five miles from the airport.

Flying into Reno is like flying into a bowl, this was my first time in (on a gusty day) and the Comanche does not have speed brakes.

Well, he gave me a series of vectors to bleed off the first 2000 feet before beginning the approach. See below.

I should have run into the first casino and bet “8” on the roulette wheel.