Should it become necessary, you really need to know and understand ways to deal with the FAA. These days it’s more likely you will first deal with the gentle Dr. Jekyll, but it can escalate quickly to the enforcer, Mr. Hyde, if the soft approach fails. Your interaction with the Feds will play a prominent role in how things go.

In June 2015, the FAA announced its Compliance Philosophy, renamed in 2018 as the Compliance Program. Its goal is to identify the cause of deviations and correct them. In his July 2020 IFR article, “Dude, You’re Busted!” attorney Mark Kolber summarized the enforcement process in five steps: the triggering event, investigation, resolution at the FSDO, enforcement, and appeals. Here’s how it worked out for my friend Paul.

In early 2016, Paul received a polite telephone call from the Teterboro, NJ, FSDO regarding a possible IFR altitude deviation two weeks earlier, claiming he was assigned 3000 feet and descended below it. (Mark says altitude deviations are the most common.) Paul knew of no deviation until the FSDO called.

Paul courteously explained he was being vectored to Essex County (Caldwell) Airport in New Jersey at an altitude he recalled as about 3000 feet. Near Caldwell, ATC told Paul to follow an aircraft at his 2 o’clock to the airport. Being so close, he interpreted this as clearance for the visual approach he was told to expect and began to descend.

When he realized the aircraft was not going to Caldwell, he informed ATC, who vectored him to final for Runway 4. For Paul, the light dawned during the call—following the other plane was not a clearance to begin the approach and descend.

Paul told the FSDO inspector he had re-learned something from their discussion: “Cleared for the approach” is required before descending to land. Paul was cooperative, honest, and learned from his mistake. The FSDO inspector concluded it was a misunderstanding and the case was closed.

Paul’s conduct was exemplary. He acknowledged responsibility and learned his lesson after informal counseling. A successful Compliance Action is considered “no action,” is not a violation, and the record is purged within 90 days. It helped that there was no safety-of-flight issue, and his error was unintentional.

At one time, instructors had to go to a FSDO in-person to renew a CFI certificate. I would politely present my paperwork, but the inspectors always seemed to think it was an imposition. I stayed calm and got my renewals. It was the same at any FAA office. Remember school? “Cooperate, graduate.”

I had to pass an oral and flight check to become Assistant Chief Pilot at a Part 141 flight school. Three FAA inspectors showed up late on the appointed day. No apology. The junior inspector had me on the oral ropes for three hours, twice as long as an instrument oral. The two senior inspectors chatted up the attractive female flight school owner and made cursory inspections to flesh out their activity logs.

So I plied Junior with coffee until he had to obey the call of nature, which ended the oral. Then I was abruptly told we would not fly afterward. Instead, the Feds flew off to a lunch place about 50 NM away.

That three inspectors showed up to do a one-person job was pure featherbedding. Worse than rude, they were indifferent. I couldn’t do a thing about it. At least I passed the oral. Cooperate, graduate.

If you are mistreated, think about what’s best for you before you speak. Be courteous but not argumentative, deferential, or submissive. The FAA are masters of bureaucracy. They can make your life extremely difficult. They can conveniently lose paperwork or put you through any hoop they choose, like a revalidation ride or anything they care to conjure up. 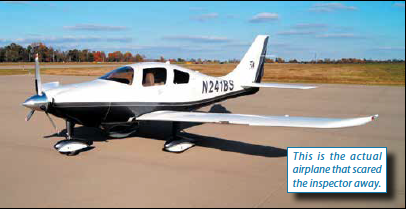 Inspector Barry came in and asked to fly our Cessna 350, formerly the Corvalis 350. Barry ramp checked me during our preflight briefing—not the best way to build a student-instructor relationship.

Barry turned out to be petrified of stalls. The 350 is very tame in power-off stalls, but even this gentle maneuver rattled him. Then I demonstrated one with half-power. Barry came utterly unglued and begged to return to the airport. Sweating profusely, he shakily slunk away. Mess with me, and I’ll mess with you—if I can get away with it. I never saw Barry again.

When it Gets Legal

I worked at a large flight school in Florida that suffered six fatalities in as many months. Two congressmen pressured the FAA to close the school because the prospect of airplanes falling on constituents sat poorly. FAA inspectors descended on the school like locusts. All the paperwork for 24 airplanes and over 100 international students was in perfect order.

Unable to pull the school’s Part 141 certificate for cause, the FAA successfully intimidated the school owner into surrendering it voluntarily. An FAA lawyer in Atlanta got on the phone and bluntly demanded its surrender. The owner again refused, and the lawyer coldly hung up.

Rather than endure a costly legal fight, the owner caved. The school closed, leaving the students in the lurch with money on deposit at risk and thorny TSA problems. And, oh yeah, I lost my job.

The FAA has lots of attorneys. Most are non-pilots, and many have no visceral appreciation for the context in which aviation is conducted. Many tend to see black-and-white, not shades of gray. If the FAA writes you a formal letter or hints at getting their attorneys involved, retain counsel. As Mark suggests, doing so creates the opportunity for dialogue with an FAA attorney. Don’t be an easy mark. It’s the FAA’s bat, ball, and playing field, which is anything but level. The flight school owner was out-toughed by the FAA, and many innocent people paid the price.

The PBR enacted legal changes to ensure that pilots facing enforcement actions are treated fairly and have timely access to information about their cases. See my article in the July 2017 issue of IFR.

Early in my flying career, a Fed ramped me and found my medical barely out of date. I thought my flying days were over before they had scarcely begun. Rather than write me up, he drove me in his Fedmobile to an AME and a new medical. He wasn’t interested in meaningless enforcement but meaningful compliance. I never let it lapse again.

Years before the Compliance Program, Inspector Ed hated to violate pilots. In one case, he and his fellow inspectors agonized over the fitting penalty for a pilot who couldn’t produce a current Flight Review. They had to suspend his license. No one gets a free pass.

FAA foul-ups damage its reputation and reduce respect for the largest operating element of the Department of Transportation, with over 100,000 employees.

The 737 MAX fiasco gave the FAA a self-inflicted black eye when they gravely failed their oversight responsibility. Two crashes cost 346 lives. Till then, the FAA had been a bastion of integrity. Many pilots, myself included, were shaken. What was this new FAA whose motives we had always trusted? A wholesale indictment of the FAA is unjustified. However grievous, this was an isolated incident.

In 2014 the FAA created two controller hiring pools. One included applicants who held an FAA-accredited degree from a Collegiate Training Initiative (CTI) program. The other pool allowed “off the street” hires where the only requirements were to speak English and be a U.S. citizen with a high school diploma.

No more than a 10 percent difference was allowed in the number hired from each pool. Thus the FAA could only hire as many candidates from one pool as there were qualified applicants in the other. CTI graduates received no preference. Why earn a four-year degree when the odds of being hired were as good as without one?

This foulup was corrected when the National Defense Authorization Act became law on January 1, 2020. Since then, CTI graduates or those with parallel military experience get preference. And just in time—the FAA plans to hire 4300 controllers in the next five years. In 2020, 920 new controllers joined the ranks. At that rate, the FAA will more than meet its goal.

Despite pockets of painful conservatism, the FAA is the most progressive, respected aviation regulator in the world. The FAA was first to approve GPS approaches in 1994 and again with WAAS in 2003. We have far more GPS approaches than anywhere else. We can fly VFR at night, which can be illegal elsewhere. Earning an instrument rating here is much easier than many other countries, and the FAA encourages pilots to do so. International students flock here for flight training.

Six years with the Compliance Program has produced welcome warming in the once frosty pilot-FAA relationship. While the Jekyll/Hyde specter remains, the FAA is nearing the authoritarian goal expressed by Dr. Daniel Buhr: “Authority is not a right to lead; it is a responsibility to serve.”