When briefing an approach, we might not care what a given “obstacle” actually is. But they do come in all shapes and sizes; the chart symbols indicate as much. So it’s a good idea, especially in unfamiliar areas with lots of obstacles, to know what’s down there, be it metal, dirt, rocks or trees. The Aeronautical Chart User’s Guide and other pubs have lots of information about how and when they’re depicted. However, the actual obstacles around an airport and its terminal area don’t all appear in one place. They’re scattered around and can pop up in unexpected places, much like the real thing.

Such is the case flying to Deer Park, Washington, elevation 2211 feet. North  of Spokane, Deer Park is known for its seasonal fun, so you pack the plane for a long weekend in the great outdoors. With just some mild IFR weather for the Friday arrival, you’ll figure on one easy approach (still filing Spokane as an alternate) and good VFR for departure on Monday. Winds at the noon ETA will be 200 degrees at a steady 15 knots; visibility 3 SM, broken ceiling 1600 feet. Plan on the RNAV (GPS) 16 approach, an LNAV procedure with two MDAs: 2640 feet for the straight-in and 2670 feet for circling to 34.

Start the briefing on the planview as it shows a number of obstacles in the area, depicted with dots and the ubiquitous tower symbol. The Chart User’s Guide, under the extensive “Planview” section, presents a somewhat oblique reminder that the symbols, and their sizes, mean different things. The ‘Δ’ symbols stand for obstacles “when they are manmade or vegetation or as a • when they are terrain.” Interesting that ‘Δ’ also is used for trees. Meanwhile, a larger dot/ elevation font depicts the “highest obstacle, whether man-made or terrain.” There’s one such dot at 5277 feet on the northernmost part of our planview, but there’s a smaller dot a bit south, also at 5277 feet, along with another to the west showing a higher elevation of 5773 feet. The only other chart depicting the 5773- foot spot is the VFR sectional, which says it’s a ski area with lookout tower.

Such inconsistencies are common, due to errors and terrain/obstacle data coming from numerous sources. On top of that, there’s just a lot of rounding-up in actual obstacle heights to meet clearance requirements when determining minimum altitudes for both IFR and VFR use. To that end, flying en route at least as high as the relevant MEA or offroute cruising altitude is just par for the course. You’ll be well above that on arrival thanks to oxygen on board. Lower and closer to Deer Park, though, beware the approach requirements for course and altitude.

At KDEW, expect the RNAV 16 at CABGO, descending to 5700 feet in the course reversal. Then intercept the inbound course of 205 degrees. Is that right? Sure is. That’s the course until FANGI, where the approach takes a slight jog to 200 degrees. Then at the final approach fix, APODS, the course shifts yet again for the inbound course of 183 degrees. That’s still not yet aligned with Runway 16; see the planview note: “Final approach course offset 19.11°.” So the runway threshold, once in sight, will appear to the left of the nose on final (assuming you’re tracking accurately
in light or no wind). So much for the FAA requirement (described in the Instrument Procedures Handbook) that “For a non-vertically guided straight-in RNAV (GPS) approach, the final approach course must be aligned within 15° of the extended runway centerline.” The southwest wind displaces the runway sight picture even further to the left, so expect a resulting offset from nose to runway of at least 20 degrees.

Does all this affect what you’ll see when breaking out on final? The airport sketch shows there’ll be Runway End Identifier Lights and a Precision Approach Path Indicator (the latter to the left of the runway). Both lighting systems are listed in §91.175(c)(3); once in sight you may descend below the MDA.

Which will you see first? Refer to the AIM, Section 1, 2-1-2: “The visual glide path of the PAPI typically provides safe obstruction clearance within plus or minus 10 degrees of the extended runway centerline and to 3.4 NM from the runway threshold.” The Runway 16 PAPI, according to the Chart Supplement, has a four-light PAPI with a 3.5-degree glidepath. With an offset of at least 19 degrees, though, don’t depend on the PAPI to get aligned—definitely maintain MDA until the runway itself is in view.

The course changes also come with multiple altitude stepdowns, so expect to stay busy with lateral and vertical tracking. And there’s some added intricacy to that final 5.6 miles after APODS. First, there’s a 3.5-degree descent angle. This corresponds to the PAPI, but what does it really mean? The User’s Guide calls this the Vertical Descent Angle, which accompanies the Threshold Crossing Height, 38 feet in this case. These “may be published on non-precision approaches. … The VDA is strictly advisory and provides a means to establish a stabilized descent to the MDA.” 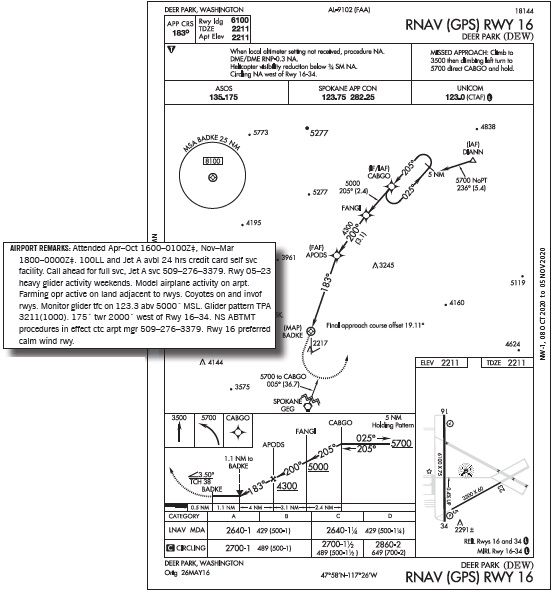 To see if 3.5 degrees would feel much steeper than standard, figure out the descent rate to expect. Use an estimated average groundspeed during final of 65 knots, based on your usual IAS of 75 knots with gear down, partial flaps. To achieve the 3.5-degree glideslope, plan on 372 feet per NM (versus 318 feet per NM for the standard three-degree glideslope). At 65 knots the descent rate is 402 feet per minute. Steeper than 345 fpm on a three degree slope, but well within a stable, normal range.

It might not be a straight slope all the way to the runway, though. Along with the VDA is the VDP (Visual Descent Point), also explained in the Chart User’s Guide as “a defined point on the final approach course of a non-precision straight-in approach procedure from which normal descent from the MDA to the runway touchdown point may be commenced.” If the required item(s) are not in sight, maintain MDA past the VDP for another 1.1 NM to B A D K E , the missed approach point. If you’re still at the 2640-foot MDA a mile from the threshold, losing that 429 feet requires a four-degree angle— doable at 465 fpm. Get all the way to the MAP at BADKE and you’ll need over eight degrees (930 fpm)—not likely the “normal maneuvers” of §91.175.

But couldn’t you still land a light single half-way down that 6100-foot runway to get another half mile? Well, yes, but “normal maneuvers” generally means landing in the touchdown zone.

Regardless, you still haven’t accounted for all the obstacles. The Chart Supplement describes a “175 FT TOWER 2000 FT W OF RY 16/34.” Did you catch that? It’s buried in the text after a bunch of notes on gliders, model aircraft and farming operations.

Is this the same tower depicted with a symbol just west of the runway on the approach planview? Could be, but the chart symbol says it’s 2217 elevation, while the 175-footer would be 2386 MSL. Meanwhile, the Runway 16 details say only “Trees.”

There is more at airnav.com, where the runway notes elaborate: “Obstructions: 60 ft. trees, 2900 feet from runway, 45:1 slope to clear.” This doesn’t appear on the approach chart, nor is it in the Chart Supplement. Sticking to the minimum altitudes on approach will provide space between you and the trees, but the minimum clearance for RNAV (GPS) straight-in approaches is just 250 feet, with a maximum 400 feet per NM descent slope, according to the IPH.

The FAA kinda explains this in AIM, 5-4-5.j.:, “The highest obstacle (man-made, terrain, or vegetation) will be charted on the planview of an IAP. Other obstacles may be charted in either the planview or the airport sketch based on distance from the runway and available chart space. The elevation of the charted obstacle will be shown to the nearest foot above mean sea level. Obstacles without a verified accuracy are indicated by a ± symbol following the elevation value.” It’s an FYI that obstacles get different treatment in different places. And there’s reality: Trees grow, or get cut down, towers get erected, and approaches undergo government inspection only once in a great while.

Like the obstacles themselves, information is often scattered from view. And you’ve only scratched the surface, so to speak. We’ll look at the missed approach next month—along with how you’ll depart well clear of any obstacles, man-made or otherwise. Better keep those publications handy.