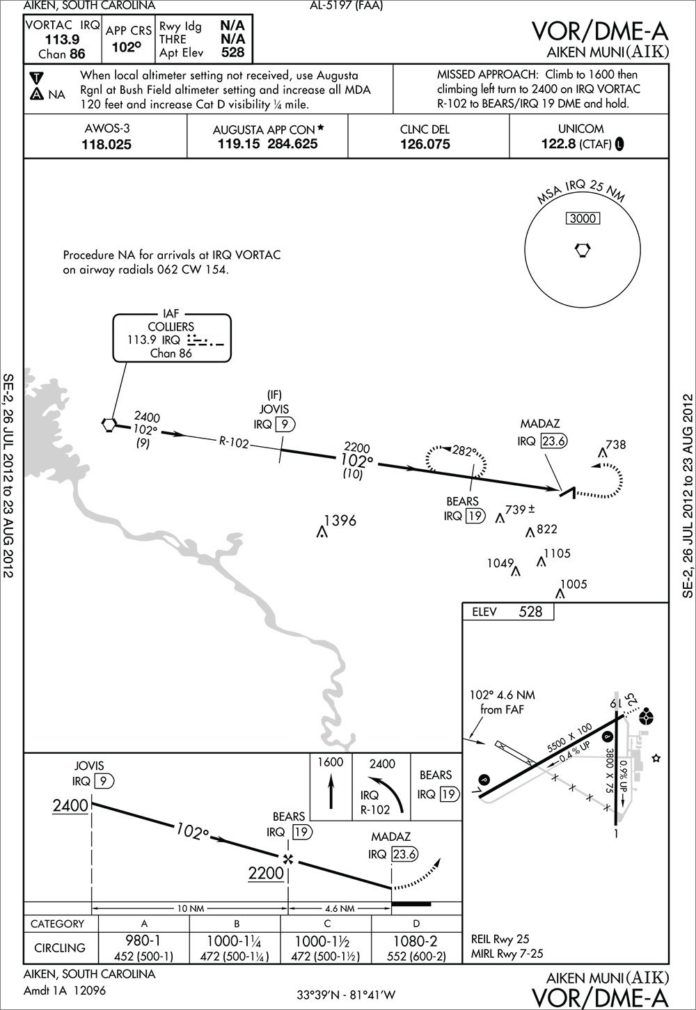 Another tale from the land of aviation compromise, where trying to dot every “i” wipes some of the “t”s right off the page. Ah, progress.

What is it with arbitrary rules and aviation? Like how some security Ph.D. determined that a quart bag of three-ounce containers don’t constitute a security threat but a single quart of Pepsi does. Maybe they think terrorists aren’t smart enough to pool their resources. Or maybe the TSA brass just has something against soft drinks.

Sometimes it seems instrument approaches are just as arbitrary, like the VOR/DME-A at Aiken, S.C. This is a perfectly straightforward VOR approach to the airport property, but not aligned with any runway, hence the “-A” in the approach title. Any runway will require a circle to land, so only circling minimums are published. No surprise here.

The missed approach point is 23.6 miles from the VOR used for navigation. That could make for some significant slop in your position if your VOR was the legal four degrees off. This probably explains the relatively high minimums.
But what’s with the procedure not approved for arrivals on airway radials 062 clockwise through 154, as it says in the plan view just above the VOR information? Did the TERPS folks feel like dissing anyone coming in from the southeast? Maybe they felt that anyone overflying their landing airport by 23.6 miles just to grab a VOR approach doesn’t deserve to have the option.
It seems likely the issue is turning around for the inbound course, but why those specific angles? It’s 40 degrees from 062 to the inbound heading of 102, but it’s 52 degrees from 154 to the inbound heading of 102. Is consistency too much to ask for?

It is an issue of turn but the prohibited angles only begin to make sense if you look at the en route chart. Colliers VOR is the hub of a ridiculous number of victor airways. The approach designers have a decision to make when this happens. If they provide a course reversal for the airways where there would be too much turn for the approach (how much that is rests on a couple variables), then they have to specify “NoPT” for the sectors that don’t require using the PT. If they don’t build a PT into the approach, they have to forbid the approach from any route where a PT would be required by TERPS standards.

Does this mean if you’re arriving via a forbidden airway you can’t shoot the approach? Hardly.

First off, you can get vectored for the approach if there’s radar coverage. Even if there wasn’t radar coverage for the approach, there might be coverage higher over the VOR, so you could get vectored to intercept an airway outside the forbidden zone, fly to IRQ and then continue on the transition route for the approach. You could also, completely out of coverage, negotiate a re-route that took you to one of the blessed airways and then to IRQ. But all this is probably moot in the real world, as you would do anything you could not to overfly your airport by 24 miles just to get an approach.

What the NA really means is that you’re forbidden from doing the approach on your own if you’re arriving from one of those sectors. This is a hold-over from an IFR system design where radar was scarce and full procedures were the norm.

The funny bit is that, back then, you could have done the approach from the southeast airways. Check out the VOR/DME-A at Marion, S.C. By all rights it should have an NA sector from 043 CW 121. But it doesn’t, because this approach is from the dark ages. You know, like 1986. It’s seen small amendments since then, but not the major one needed to bring it in line with the (relatively modern) TERPS criteria about labeling NA sectors for airway arrivals requiring sharp turns. It’s on the list to do, but it’s not considered “safety related” so it’s low on the list.

Which means you can turn as sharp as you want at the VOR for the Marion approach, and kind-of proves that doing the same at Aiken might be a bust, but wouldn’t be a hazard. In fact, no one would probably care, or even notice. If they did, you could always say you were packing more than three ounces of liquid—and had to get down fast.