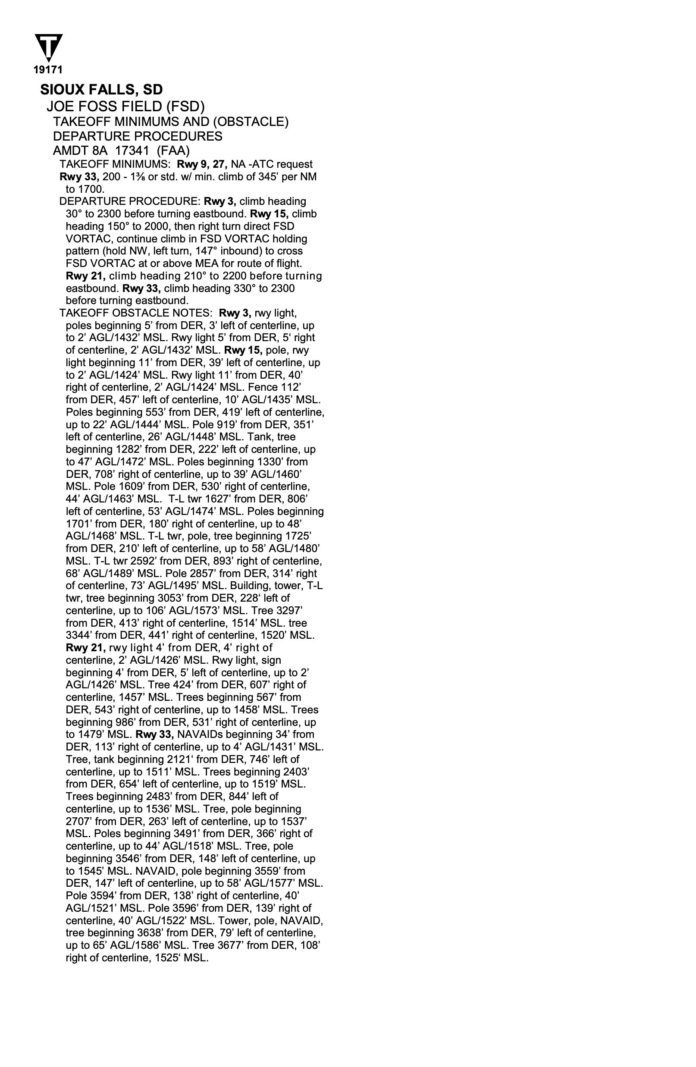 Skipping fine print on procedure charts is common practice. We’ve all done it. It’s right up there with NOTAMs—those hard-to-read footnotes on stuff that, lots of the time, gets missed and isn’t that useful or meaningful anyway. But much of it is good-to-know information. So it behooves us to at least take a scan.

We’re departing Sioux Falls, South Dakota (KFSD) for a trip to Jeffersonville, Indiana (KJVY) via RNAV, with IMC for the entire four-hour flight. The usual way to cover your bases is to review departure procedures, maybe en-route charts, then approach charts, right? Perhaps, unless you’re one of those who (admirably) reads all the text from the top, rather than jumping straight to the meat in the middle.

Parked on the west GA ramp at Sioux Falls, you’re hoping for that southeast wind so you can get a quick taxi to Runway 15. Sure enough, the latest weather report grants your wish: 160 degrees at 15 knots, gusts to 25. However, that clear weather you also wanted isn’t gonna happen until after dark. For now you get to depart with cloud bases at 400 feet and visibility at four miles.

Does this meet your takeoff minimums? As a Part 91, single-engine-land flyer it can legally be as low as 0/0, but you prefer to be able to be able to make it back in if need be, plus a little margin. So use the RNAV 15 approach as the backup. But wait: You’re LNAV only, no vertical navigation, so your MDA is 1920 feet with one-mile visibility. This is nearly 100 feet higher than the current ceiling—still legal to fly under 91.175, but not a good turnback plan.

Switch the focus for a moment on the big picture, and you’ll see that there are other options. The RNAV 21 has LNAV minimums of 1820 feet, just about at the 400-foot ceiling. However, if you take a minute to figure the crosswind component, it’s more than 20 knots. Your personal maximum is 18. That’s two iffy turnback plans against a miniscule chance of needing one. You decide it’s good enough, but as you do, something inside is urging you to take a minute for another look.

This whole exercise is about handling an emergency, so planning that contingency with the possibility of a miss is a bad plan indeed. Maybe dealing with the crosswind is better. The header box with thesymbol is among the most-skipped items, so let’s look closer. Where do you keep your Takeoff Minimums, (Obstacle) Departure Procedures notes for the entire CONUS? If you’re into paper charts, they’re all in the same book as the approaches; digital users have to tap around and maybe search for the relevant city/state. For Sioux Falls, see Runway 15: “climb heading 150˚ to 2000, then right turn direct FSD VORTAC, continue climb in FSD VORTAC holding pattern (hold NW, left turn, 147˚ inbound) to cross FSD VORTAC at or above MEA for route of flight.” Yikes! Do you need to brief that?

Keep reading and find that the reasons are poles, trees, buildings and such, with several references to a T-L tower. The highest of these is 1573 feet MSL, no more than 150 high. Not all that onerous, but a worst-case scenario like an engine failure on departure would render any obstacle plenty tall. (“T-L tower” refers to transmission line tower, if you don’t have your FAA Digital Obstacle decoder ring handy.)

Do you still need that messy ODP? Not unless you’re a non-Part 91 operation, also detailed in 91.175—as long as your clearance keeps you away from and well above the obstacles. Your expected clearance, by the way, is both efficient and safe: a straight-out departure southeast to CUBEX before continuing on course to the Fort Dodge and then Waterloo VORs.

Those southeast winds will persist all the way to Indiana, so the plan is to enjoy a 300-mile final to Runway 14. According to the airport sketch, this also offers the shortest taxi to parking. But wait again: Where’s the approach for 14? There isn’t one; for an instrument arrival, the ILS or LOC 18 is the best choice. It’s still OK for the winds and you could circle to 14. LOC minimum is 980 feet (MSL); circling’s 1000 (MSL). The AWOS at Jeffersonville says it’s 1200-3 (AGL). You’ve got a 200-foot personal margin, so this is plenty to circle from the LOC course and into a left base for 14. Oh, and, there’s another often-skipped symbol at the bottom of the procedure,, to investigate.

Recall that in recent years, the FAA has expanded protected areas with increased circling radii, expanding the distances depending on the aircraft speed. Your Category B, 100-knot radius went from 1.5 to 1.8 NM. This is good to know on a marginal-vis day, and that inverse C does pop up frequently.

That’s still acceptable for today, so back to deciding where to land. Why not just take Runway 18? Since the weather won’t require it, the only reason would be a shorter taxi. Should you need to stick to 18 all the way, one strategy is to shorten the taxi by landing long, touching down just before the runway intersection and making the next right turnoff. With 7000 feet of pavement on 18, it’s certainly an option. Just be sure to brief the missed approach and commit to flying it should you go past the intended touchdown point.

This happens a hundred feet earlier, but that was certainly safer and you get an easy taxi. Convenience notwithstanding, it pays to plan for both efficiency and safety. We enjoy taking care of the former, but it’s a must to cover the latter.

Elaine Kauh is a CFII in eastern Wisconsin, where she eagerly awaits the latest edition of the Digital Obstacle File every 56 days just to see if any silos or grain elevators have moved around.