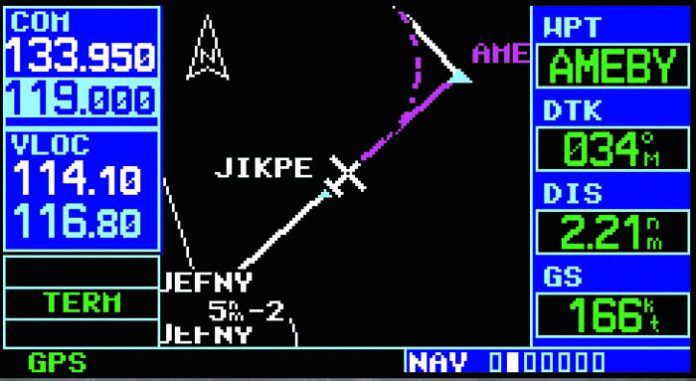 I was thrilled when the first LORAN with waypoint databases made life ever so much easier and, ultimately, safer through improved situational awareness. But it came at a cost to keep the data current, and all of us pilots have objected to the cost from day one. As a result, many pilots choose to fly without the latest digital data.

Flying with outdated digital data is almost the high-tech version of flying with outdated charts, something we’ve all done on occasion and some of us do as a matter of habit. (See the sidebar on legality for what I mean by “almost.”) But there’s a subtle difference that makes it more risky. When we use charts, current or not, we are an active component in the navigation process. We enter the data, tune the radios, ID the stations, cross-check and constantly monitor our progress. This keeps us in the loop, ready to catch and react to an anomaly.

When we’re using digital data, we tend to trust our magical wonder boxes and monitor them casually, if at all. We traverse hundreds, or even thousands, of miles without so much as a glance at a paper chart. Whether this trust is good or bad is a topic for another day, but it’s safe to say that it carries more risk with outdated data.

Charts and their electronic counterparts change and require updates for three basic reasons: additions, modifications and deletions. Additions are the simplest to deal with, so let’s knock that one out first.

Stuff is constantly added to our airspace. If something has been added since your last database update, the risk to you is that ATC might issue you a clearance involving that new route, fix or approach. You’ll search for it a bit, then you’ll clarify the name with ATC, then you’ll search for it some more, and finally at some point you’ll confess that you don’t have it and need alternate instructions.

The least that will happen is some embarrassment and confusion while ATC works up something else to give you. Somewhere down the list of not-so-good things that might result is that the controller won’t have time to work out an alternative and simply clears you to hold at some fix out of his way (and yours) with an EFC of Feb. 30. The worst is that you could be written up by that frustrated and overworked controller, and you’ll have some ‘splainin’ to do. Best case: not good. Worst case: certificate action.

At least, that’s what could happen with outdated GPS databases or digital en route charts. Missing the addition of a new approach because you didn’t have the approach chart on your MFD is different: You simply don’t accept the approach you weren’t planning for anyway. No harm, no foul.

Deleted From the Database

Say you’re using old data with an NDB that has since been taken out of service. This is unlikely to pose a navigational problem. You have a fix on your screen or in your database that ATC won’t reference. Removal of an intersection that defined a route could be a problem, but that doesn’t happen with near the frequency of fixes changing on approaches.

If the NDB was part of an approach, you could have an issue. If the NDB helped define a fix on the miss, you’d be clueless on the new procedure because you’ve got the old chart. But this is really the same risk as flying with an outdated paper chart. Unlikely to bite you, but a clear violation of your FAR imperative to have “all the available information” for your flight and something with the potential to have you trundle off someplace the controller isn’t expecting. Best case: sloppy flying. Worst case: total loss of separation (a.k.a., midair collision).

Between no effect and disaster is the more likely scenario that you’ll ask for an approach that no longer exists. Result: embarrassment and quick thinking to switch to plan B.

Modifications can take on multiple personalities, but none of them are good. A fix might simply be renamed. There could be a few awkward moments or a blown approach if the controller clears you to SUMWR and all you see is NOWAR. Sometimes, fixes are relocated without a name change. That could cause you some real pain. For a routing change, the best case of using outdated data is a simple, “Uhhh, where are you going?” from ATC. Worst case: traffic conflicts and certificate actions.

The most insidious and potentially dangerous risk of flying with outdated data is with procedural changes. What if the approach procedure has changed, with perhaps different altitudes, step-downs, frequencies or even minimums? Those changes aren’t made casually and are typically necessitated by the presence of new obstructions or degraded navigation signals. Best case: seemingly sloppy flying. Worst case: crash.

Some of you may use Air Charts. For those of you that don’t know them, these are NACO en route charts in a big binder. You get one binder a year and then get sent periodic lists of changes. How many Air Charts users actually review those changes and translate them to the charts? Probably not many, human nature being what it is. And most get along just fine because the likelihood that any given flight will encounter a change is minimal, and most changes are minor.

Like the Big Sky theory, flying with out-of-date data will rarely bite you. But, as we’ve said above, where it does bite, it could bite hard. The solution is finding the right level of acceptable risk. In this case, you can both buy down your risk with current data and you can mitigate your risk while using old data. Let’s look at the latter first.

Both for legality and practicality (see sidebars) it makes sense to keep at least one panel-mount GPS database current if you’re using it to fly IFR. You’re pushing the legal envelope and exposing yourself to a good chance of at least an awkward situation, if not a dangerous one, if you’re going to lean heavily on an outdated GPS.

But if you’re flying ILS approaches at every field, you can work without digital currency (and you can still file /G). Both en route and approach charts from the government are on-line for free. Many other countries have some charts for free as well. Print these out and compare the shape of the route, courses and distances you’re planning on the chart with the one on your navigator as you fly. This way, you’re more likely to detect and correct any discrepancies. For approaches, compare frequencies in the database with those on the paper before blindly loading them from the database. Compare routes, courses and distances.

As an in between, look at a data subscription on your iPhone or portable GPS. That data is much cheaper than the panel-mount data and more convenient than paper if you’re covering a large area. Use the portable to double-check the frequency in your GPS hasn’t changed or see that the amendment date on the approach chart in the hard-to-read—but current—portable device is the same as the date on the chart in the out-of-date, but easy to read, MFD.

Out-of-date obstacles and terrain data is unlikely to burn you. We know many pilots who just do periodic one-time updates. The practical glitch in letting any data get stale, though, is that one-time updates might not be available for everything.

Flying is a constant balancing of legality, practicality and acceptable risk. Icing is a good example. While it’s virtually illegal to fly in any moisture when it’s below freezing in most GA aircraft, some careful planning can bring things down to a trivial risk on many cold-cloud days.

Now compare: Rigorous compliance with icing limitations limits the utility of your aircraft, while rigorous compliance with data currency limits the vitality of your wallet. For some, this may be a difference without distinction, but for others it is a significant distinction that should fall to the side of reduced risk. As much as we might complain about the cost of current data and flying in general, few of us have to choose between dinner and data.

Once you’ve taken steps to mitigate the smallish risks of flying with outdated data, it’s a balance between money and hassle. From my perspective, I’ll take the managed risks that gets me where I need to go more often, and not add any stress just trying to save a few dollars I can afford to spend. You may see it differently.

Besides, when all the data is current, life is easy—except for updating it all every month.

Frank Bowlin will have seven different databases in his almost-complete Cessna 340 upgrade. We’ll check back with him in a year or two.