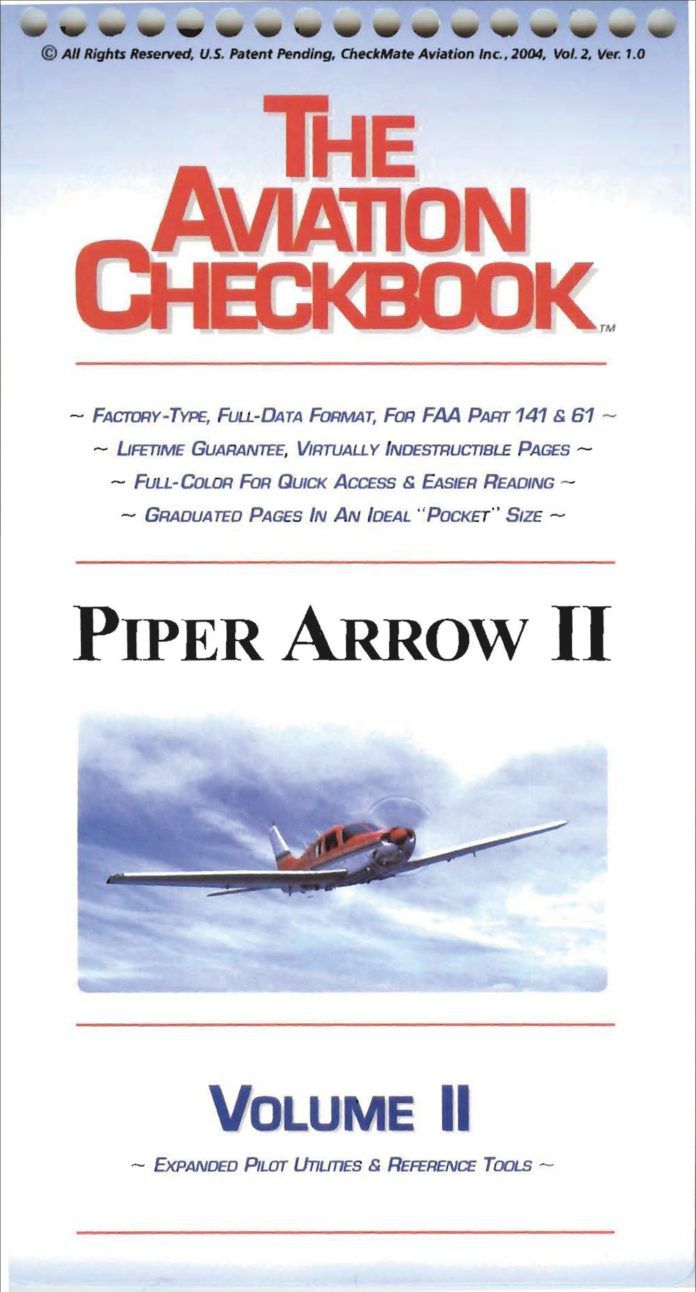 Now, before we get into this, let me head off some hate-mail. The objective of checklists (and do-lists, for that matter) is to make sure you get everything done when and how it’s supposed to be done. If you can use a do-list successfully, there’s no need for you to stop. Anything that any pilot uses to get the job done is sufficient. I’m just going to explore do-lists and see if there’s room for enhanced efficiency. Perhaps this’ll even change your mind.

Purpose
Question: Why do we use a checklist? The answer, of course, is to make sure we don’t miss anything important that affects safety of flight (first) and making sure we don’t break anything on the aircraft (second). So, with an engine-start checklist that contains items like mixture to full rich, battery master on and starter engaged, which of those requirements are we fulfilling, safety or not breaking anything?

We’re not fulfilling any of them, are we? Say you forget to turn on the master What’ll happen? Well, not a thing, of course, other than you giving your forehead a resounding dope-slap. Safety certainly isn’t compromised, and we didn’t do anything to hurt the airplane—we just didn’t start it, and you don’t need instructions to tell you that.

So, why is it there? It’s there to tell you how to do it, not just to help you check to see if it was safely done. It’s a do-list—something that seems to be the illegitimate child of the marketing department and the legal department.

Clearly, do-lists have their place as the basis for an amplified section that actually does describe how to start an engine. That might be particularly useful if this is the first time you’ve ever seen a Cessna 152, or perhaps the first time you’ve flown a Malibu. However, once you’ve learned those basic procedures, the wordy and excessively inefficient manufacturer’s do-list is a waste of time. And, here’s the real key, anything that’s a waste of time is unlikely to get used when time is short—the exact time when you’re most likely to miss something and want the checklist to bail you out. Kind of a Catch 22, isn’t it?

Da Regs
I was unable to find anything in the general sections of Part 91 that even uses the word “checklist” much less mandates its use. Subpart F, Large and Turbine-Powered Multiengine Airplanes and Fractional Ownership Program Airplanes do have a requirement for checklists, as does Subpart K that specifically governs fractional operators. In Subpart M, Special Federal Aviation Regulations, operators of the Mitsubishi MU-2 are also required to use a checklist. So, if you’re flying a piston airplane or a single-engine turbine, and the plane isn’t being run by a fractional operator, there’s no specific requirement for a checklist.

But that doesn’t mean you shouldn’t use one. You just don’t have to. In fact, there doesn’t really need to be one in the airplane. By extension, then, we can conclude that there is no requirement to use any particular checklist if you do choose to use one. And that means you can make your own or buy one that’s simplified, but you don’t have to use the manufacturer’s multi-page do-list.

Again: Hold the hate-mail. 14 CFR Part 91.13 says we can’t do anything careless or reckless. I agree that under many circumstances if a pilot deliberately chooses not to carry a checklist and ends up making a stupid mistake that could or should have been prevented by use of a checklist, perhaps that pilot should be found guilty of violating this section. The point being that any custom-made checklist should be a meaningful, useful and thoughtfully created tool to assist you in the proper and safe operation of that aircraft and should contain far more detail than the notation, “Crashing sucks.”

A Time For Everything
For my day job, I fly regional jet airliners. All of our normal-procedure checklists for a flight fit on the front and back of a single card roughly the same size as a Jepp sheet. Now, an RJ isn’t a particularly complex aircraft in the grand scheme of things, but it is a bit more complex than a Piper Arrow. Yet, the Arrow’s checklist is a number of pages. What’s the difference? Well, the one from the Arrow is a do-list while the one in our RJs is a checklist.
Pilots should use a checklist to verify that stuff gets done. The actual doing of those items should be left to a flow, a sequence of programmed mostly muscle-memory operations that we perform when we should because we know and understand we need to do them. The last step on that flow is to grab the checklist to make sure we didn’t miss turning off the fuel pump during the after takeoff checklist, for example.

The do-list, on the other hand, is a list of every item to be accomplished in order to get a specific task done and often includes additional, even detailed, information. It’s a set of instructions for the pilot who has no idea how to proceed, or so little experience that s/he might not remember how to start the engine, for example.

The disadvantage of a do-list is that it’s wordy and long, usually running to many pages in the POH. It’s long and wordy, because just about everything you might need to do during your flight is in there, oftentimes with more detail than you typically need.

The accomplished pilot, for instance, already knows to engage the starter to, um, start the engine. He also knows it’s necessary to reduce power and flare to avoid turning a landing into an apocalyptic game of lawn darts. You just don’t need a checklist to tell you that stuff.

Make the Transition
Most students or transitioning pilots will need to start with the manufacturer’s do-list. Without it, many procedures just won’t make sense or will be too abbreviated to get the job done.

For example, say this is the first time you’ve flown an aircraft whose engine is controlled by a FADEC system. The FADEC likely has redundancy, somewhat like we have with left and right magnetos on conventionally controlled engines. On your first time through, you’ll almost certainly run into problems knowing exactly what to do during the engine run-up.

There are likely instructions in the do-list that tell you to push a button to disable one FADEC or channel at a time, similar to the mag check you’ve done for years. But, once you’ve been through that a couple times, a simplified checklist that just tells you something like, “FADEC—Checked” would suffice. When you get to that point, consider switching to a prepared checklist. The manufacturer may actually provide one, or you can use a commercial product like those from CheckMate and SureCheck.

Probably because of liability concerns, these products tend to recreate the manufacturers’ checklists with some accuracy, but in a bit of a simplified presentation. They’re good for use later in the learning curve or perhaps if you don’t fly often, but where you want to end up in an aircraft you fly frequently is the true flow-oriented checklist, which you’ll probably have to create for yourself. (See page next page.)

Like a Pro
Using a flow to accomplish your tasks will help you perform more efficiently. That’s why it’s commonly used in professional flight departments. However, you must fly often enough for the flow to be performed from memory. Once you get there, you’ve completed the transition from do-list to checklist.
Frank Bowlin is a bit of a checklist junkie, having created many over the years. Yet, he continues his quest for the ultimate checklist.

Roll Your Own Checklist
By necessity, the procedures and checklists provided by the manufacturer for light piston aircraft are typically complex. In fact, if we follow some of them to the letter, they just run us around with no particular organization or flow to what’s being accomplished.

As an example, we’ll use the Before Take-Off Check for the Piper Seneca. You can see that it has no flow, no reason or organization to it. Yes, it covers everything (in agonizing detail), but does so in a manner that is so tedious that it takes some real perseverance to get through what should be a rather simple check. In fact, in many cases these procedures jump around enough that they may actually cause you to miss items, which is exactly the opposite of what they’re intended to do.

To build a simpler version of this around a logical flow across the panel, start by grouping items together that are physically close to each other in the airplane. Then remove items that are simple enough that they can be covered by a related entry. For example, instead of separate items to check the altimeter and attitude indicator, create a single item for “Flight Instruments—Checked.” Similarly, we might have just a single entry for “throttle quadrant” instead of separate items for prop, mixture and friction lock.

Simplify it as much as you think appropriate for your level of experience and attention to detail. If the original has separate items for alternate air, cowl flaps and fuel valves, all on the lower pedestal, but you have a tendency not to go all the way down to check the fuel valves, leave them as a separate item. The checklist you’re creating must help you fly the airplane more efficiently and safer.

The question may arise about removing something altogether. For example, Piper includes checking that the alternators are on during this checklist. In practice, that should be done back on the ramp just after you started the engine. At this point, however, it might be best if you left that on and relied on your experience with the streamlined, but not yet abbreviated, version before you start completely removing items in later versions.

Once you’ve simplified the checklist, rearrange things into a logical flow from which you’ll perform them. You want to arrange the items so they progress meaningfully from one place to another without jumping all around. Take some care with this so the flow is both orderly and logical in terms of when each item should be done. For example, you really don’t want to be turning on your lights for departure until near the end. Your ultimate goal is to be able to perform the flow from memory and then just use the checklist to, you know, check that you did everything during your flow.

You may need to remind yourself a few times during this whole process that the checklist and flow you’re developing are for an audience of one—you. Put the items in there that you need, but simplify the items you really don’t need. Your objective, of course, is to make it as efficient and safe as humanly possible.

Finally, write your checklist from the flow. Don’t laminate it just yet. Go flying with it a few times to debug it. It’s likely you’ll find some areas to improve. —FB