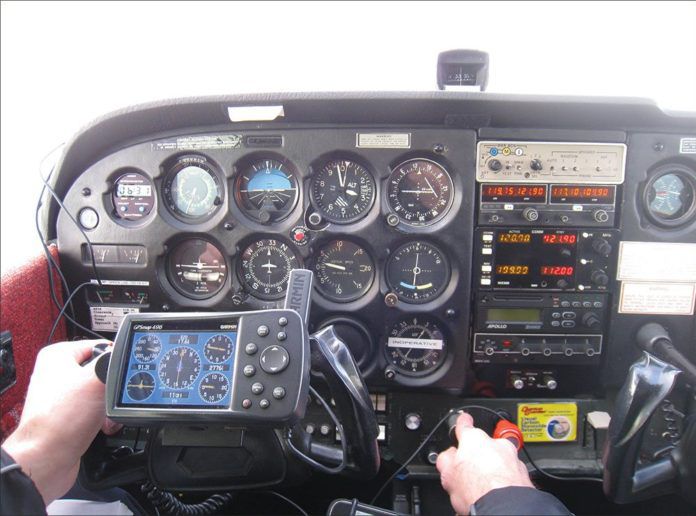 It’s a tough IFR world for /U aircraft out there. ATC issues direct clearances assuming the pilot has an IFR-legal GPS. But there are a few tricks even without approved RNAV.

Flying the system without an IFR GPS these days can be a frustrating experience. You’re plodding along the airways while you listen to more-equipped birds getting time-saving directs off-route.

Often ATC will give you a similar clearance even though you’re not equipped to fly it, such as when the VOR in question is well out of range. While it’s tempting to simply punch the VOR into your portable GPS or get a heading off your iPad, it’s technically not kosher (more on this in a moment).

The simple fix we’ve recommended for years is to simply ask for a vector to the VOR and “direct when able.” This frees you to proceed direct under ATC’s watchful eye, but using all resources—including that portable GPS—to make sure ATC’s eye doesn’t see anything needing correction. As the VOR comes in range, you can center a CDI and keep on truckin’. How might this sound? The exchange might go like this:

But it’s a bit less clear when you get a clearance direct to a fix. Sure, you can ask for the vector, but it’s not like a VOR; you don’t really know you’re on or off course until you arrive. Is that legal?

The answer straight from the FAA is, “Yes.” This is good news for the non-GPS crowd, because increases in everyone else’s capability has curtailed theirs.

Old News
Back in the days before GPS, an expert IFR technique was being able to go directly to a fix defined by two crossing radials. The term “direct” is somewhat of a misnomer, as the heading was approximate and you’d usually close on one VOR’s radial before the other one. But it was accepted by controllers and taught as a technique by discerning flight instructors. We explained the technique in “VOR Survival Tips” (June 2010 IFR).

Essentially the same technique was commonly taught in the Air Force as the BDHI-pencil method. Military pilots routinely used it for fix-to-fix navigation in U.S. airspace. It’s still in the toolkit of older military aviators, but various forms of area navigation (GPS, INS, etc.) have made it only slightly handier than celestial navigation.

But it’s not taught any more. In fact, the Air Force Flight Standards Agency (AFFSA) banned the practice: “In order to legally conform to NAS area navigation procedures and the national route program (NRP) as outlined in FLIP GP chapter 4 and FAA AC 90-91, USAF pilots and air traffic controllers should not file, give, or accept a clearance (as applicable) that requires an aircraft to navigate direct to a radial/DME fix (perform a fix-to-fix) except under the following circumstances ….”

The circumstances include RNAV capability, radar monitoring and an operational necessity to do so. The text goes on to say, “Unless the aircraft capability or operations meet the parameters defined in Para 2, Subpara A thru D of this message, pilots should reply with ‘unable’ … under these circumstances, ATC should provide navigation guidance to the radial/DME fix either via radar vectors or an alternate routing.”

OK, but civilian GA isn’t governed by USAF rules. Where does it say in our civil regs that proceeding to a fix using an approximate heading, dead reckoning (DR) and some way to tell if you’ve arrived (crossing radials) is illegal? For that matter, where does it say that heading DR to VOR and waiting for it to come within range is illegal?

Answer: It doesn’t. Not anywhere that’s easy to find, anyway. It’s alluded to in some FAA legal interpretations. There’s rumor that some coming changes to the AIM will clarify this, but they’ve yet to appear.

However, there is clearly a prohibition in the AIM against using a portable GPS as sole-source navigation under IFR (ironic, considering that’s far more accurate than the old point-to-point techniques that are now falling from grace). But considering almost everyone has at least the portable GPS onboard, it’d be a tough sell to the FAA inspector that you were doing DR and only using the iPad GPS for “situational awareness.”

Long Vectors
So where does this leave us when we want to go direct but we’re /U? A vector towards a VOR and direct when able is fine because the controller has responsibility while you’re not receiving the VOR and you can take over when it comes alive and you can make on-course corrections.

But when you’re on a “direct when able” vector to a fix defined by crossing radials, you can’t monitor course until you begin to intercept one of the two radials—by which point you’re probably off-course. We asked FAA Flight Standards directly if this was OK, and were told that it absolutely was:

“Yes, in Joint Order 7110.65 U, 5-6-2 e., controllers may provide radar navigational guidance until the aircraft is established within the airspace to be protected for the non-radar route to be flown, or on a heading that will, within a reasonable distance, intercept the non-radar route to be flown, and informed of its position unless the aircraft is RNAV, FMS, or DME equipped and being vectored toward a VORTAC/TACAN or waypoint and within the service volume of the NAVAID.”

If you’re wondering what the 7110.65 reference says, it’s short: “So as to permit it to resume its own navigation within radar coverage.” So one of the ideas is that you’ll pick up and navigate when you arrive at the fix. This brings up an interesting point. What if the fix isn’t on any airway?

The CLOWW intersection is a common clearance point when arriving Portland, Maine, but it’s not on any airway. Can you accept a direct-when-able to CLOWW even though you can’t read radials off a chart that identify CLOWW’s location? For that matter, can you accept direct when able to an airport not co-located with a VOR?

The official FAA stance is no, even though it’d be pretty easy to estimate a position of CLOWW or an airport off your chart by measuring your own crossing radials. This would be nearly as accurate as the published ones on the chart and certainly within protected airspace. But there’s no official fix position besides the lat/long, and there would be no flight-checked, published minimum reception altitude. It’s possible you’d be lined up just right with some signal-blocking structure.

We know some pilots who would take the clearance anyway. We can’t recommend that. But you could try asking for a destination nearby that you could receive, like JOHNZ or POPPP. If you can work out something that’s acceptable to ATC and shortens your route, so much the better.

How Far to Take It?
There’s one other part of the response by FAA Flight Standards worth thinking through. They refer to “… a heading that will, within a reasonable distance, intercept the non-radar route …” What’s reasonable here?
We say it’s whatever ATC is willing to grant. If you can wiggle a 500-mile vector with direct when able, more power to ya. It might raise some eyebrows when you check in with the next controller with 450 miles to go, but you got a legal clearance—until someone down the line changes it.