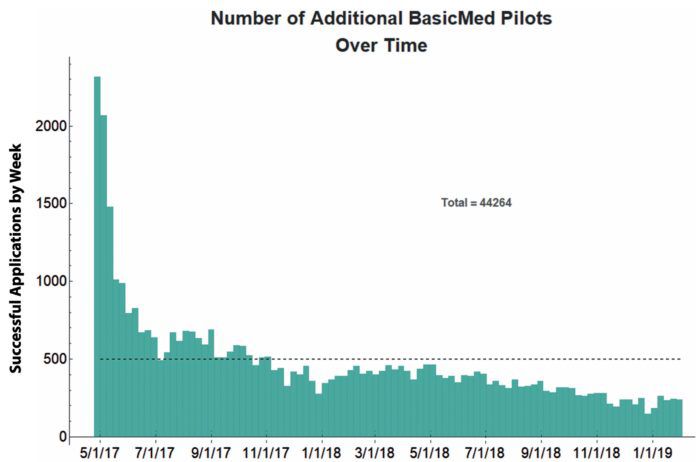 After our initial introduction, “No More Medicals?” in March 2017, we’ve published two subsequent articles on BasicMed—”BasicMed Status Report” in February 2018, and “BasicMed Follow Up” in July 2018, where we discussed conclusions from a survey of members of the Flying Physicians Association. In the August 2019 edition of the Federal Air Surgeon’s Bulletin, the FAA Aerospace Medical Education Division of the Civil Aeromedical Medical Institute published data on results to date.

BasicMed is the result of a legislative initiative that produced Public Law 114-190, the FAA Extension, Safety, and Security Act of 2016, signed into law on July 15, 2016. BasicMed (a term that came later) is found in Section 2307 of the law: Medical Certification of Certain Small Aircraft Pilots. This law directed the Executive Branch, through the FAA, to issue regulations within 180 days to allow pilots to act as PIC under the law. The regulations (new Part 68 and changes to Part 61 & 91) and the term, BasicMed, came into existence when the rules were published in Federal Register on January 11, 2017 and became effective on May 1, 2017. Because the law only addressed pilots acting as PIC, we have the unintended consequence that a safety pilot, not simultaneously also acting as PIC, needs an FAA Medical as a required crewmember, as we’ve discussed previously.

The requirements to meet a BasicMed authorization are well documented:

Must have held an FAA medical certificate any time after July 15, 2006. It must not have been revoked, suspended or withdrawn but it can be expired.

Have a medical exam conducted by a state licensed physician (MD or DO) every 48 months. This time period is day-to-day, not the traditional FAA calendar months. The medical exam needs to be properly documented by the FAA Comprehensive Medical Examination Checklist (CMEC).

Complete an online course every 24 calendar months. Currently AOPA and the Mayo Clinic offer these courses. Both are very good, so it might be worthwhile alternating between the two.

Fly an aircraft (IFR or VFR) that has a gross weight of 6000 pounds or less, fly at 18,000 feet MSL or less, fly at 250 knots or less (the aircraft could be capable of exceeding 250 KTS, but can’t be flown that fast), is certified with no more than six seats including the pilot’s seat. (Removing seats from a larger aircraft doesn’t qualify.)

Currently, BasicMed is recognized only in the U.S. and the Bahamas.

There are other requirements for pilots with certain cardiovascular, neurological and psychological conditions.

When flying under BasicMed, a pilot does not need to carry any certification other than a driver’s license. The pilot needs to keep a copy of the CMEC and medical education course completion certificate in his logbook. However, if requested by the FAA, a pilot needs to make these documents available in a reasonable time frame.

Since 14 CFR Part 68 is an “operational” rule, it is under the responsibility of FAA Flight Standards Service (AFS) and not FAA Medical. Having said that, FAA Medical still plays a part in BasicMed, as we shall see.

As of June 10th 2019, 48,512 pilots are flying with BasicMed. The histogram on the bottom-left of the previous page shows week-by-week the number of pilots completing BasicMed requirements. As expected, it is left skewed starting on the effective date of May 1, 2017 when there was a rush of pilots (about 2300/week) signing up with BasicMed. The last week reported is the first week of February 2019 showing 44,264 pilots with BasicMed. It has now tapered to about 200 new pilots per week. Presumably, no pilot will have needed a new BasicMed medical exam before May 2021, since the exam is good for four years. This also means that the number of pilots with BasicMed will continue to increase, at least until then.

(2) Pilots over age 40 with current medical certificates who are thinking about BasicMed at renewal time.

(3) Pilots at any age and any previous FAA medical, who require a special issuance,

(4) Pilots with FAA medicals obtained before age 40 who are now older than 40. Such pilots could get an FAA Third Class medical that is good for two years or switch to BasicMed with a four-year duration.

It would seem that the first group could represent the first wave 1000-2300 pilots per week during the first few weeks of BasicMed. Probably wanting to get back into flying. The second group could represent, to some extent, pilots following the initial rush who had current medicals on May 2017 and renewed through BasicMed—perhaps starting around January 2018.

The third group are pilots with special issuance (SI) medical certificates. Regardless of class of the medical, an SI is usually good for one year. Depending on the underlying medical reasons for the SI, medical tests and documentation are needed for renewal. The expense could run into the hundreds or thousands of dollars each year.

BasicMed gets rid of SI, except for a one-time SI for conditions previously mentioned. According to FAA Medical, 12,427 BasicMed pilots (28.1 percent) had an SI at their last FAA medical certificate vs. 6.2 percent of pilots with Third Class. However, comparing 28.1 percent to 6.2 percent is comparing two different populations because the group percentages are not age adjusted. Therefore, it might not be a fair comparison since people tend to have more health issues with increasing age.

The chart at the bottom-right of the previous page is interesting. The ages represent the age when pilots obtained their last Third Class certificates or first BasicMed, not their current ages. It shows that the median age of BasicMed pilots is 64.3 years compared to 41.0 years for pilots with Third Class medicals. (Using the median age instead of the average or mean age is a better statistic of “central tendency” since the mean is very sensitive to extreme values, while the median is not.)

We can say with a high level of statistical confidence, BasicMed pilots are older than Third Class pilots. However, the comparison of the medians of the two groups could be misleading because the Third Class distribution is bimodal—it has two “humps.”

(1) At younger ages (15 to say 25), the data might reflect the first FAA medical received by pilots.

(2) Something happens around age 40. After 40, Third Class medicals are only good for two years, down from five years. This group of pilots seems to also be distributed normally.

(3) After 40, pilots with previous First or Second Class medicals could decide to renew with BasicMed, or stay with Third Class. Some pilots might find getting BasicMed too much trouble, specifically finding a willing doctor and doing an on-line course.

According to the NTSB database, there have been 179 accidents by pilots with BasicMed—34 fatal accidents with 37 fatalities. These represent accident counts and not accident or fatality rates since there are no denominators to calculate rates. These accidents are still under investigation. Even if you assume that medical reasons played an important role in accidents, it would be difficult to determine whether having BasicMed, compared to an FAA medical, was a factor in the accidents.

The Public Law that created BasicMed also directed the FAA to provide within five years “a report that describes the effect of the regulations issued … and includes statistics with respect to changes in small aircraft activity and safety incidents.” The FAA has, however, decided to also issue three-year and four-year interim reports; we can expect the three-year report sometime next year.

Pilots need to be responsible for their own health and should not depend on FAA physicals or BasicMed as their only source for healthcare. Preventive medicine is always better than corrective medicine.

For FAA medicals, a good strategy for pilots who might have a medical condition that could result in denial or deferral, is to pay an Aviation Medical Examiner (AME) for a consultation. Sometimes, all that is needed is to bring documentation.

Lastly there is a philosophy that pilots should only get the lowest level of medical certification required to meet the pilots’ needs.

Recently, Luca Bencini-Tibo received the FAA Wright Brothers Master Pilot Award for his 50 years as a pilot and finds BasicMed more convenient since it is good for four years.