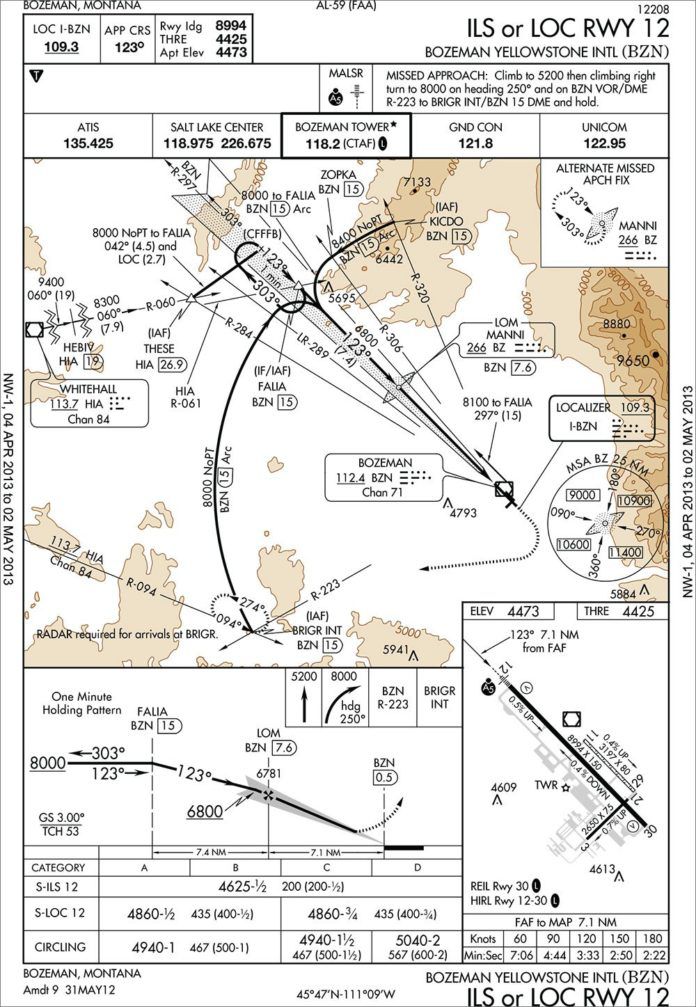 The BZN VOR cannot be an IAF because the course between the initial and intermediate segment—BZN to FALIA—cannot exceed 120 degrees. Approach designers can get around this issue by using a feeder route.

Feeder routes just transition a pilot from the enroute structure to an IAF. Although they’re associated with an instrument approach procedure, they must provide en route terrain clearances. The ILS 12 has a feeder route from BZN and another from White Hall (HIA) VOR. Feeder routes can only be added to provide an “operational advantage.”

Another method for dealing with aircraft arriving from different angles is to use an arc. On this approach, the arc allows pilots to join the initial segment via V86, V343, or V365. Note that the south arc has a lead-in radial (LR). An LR is required anytime the angle between the initial and intermediate courses exceeds 90 degrees. An LR gives at least a 2nm warning to the intermediate segment.

Many transition routes, like the one from Mustang (FMG) VOR to TAKLE on the ILS 16 into Reno result in a large turn requiring a procedure turn, as in this case, or a hold. These are interesting because outbound the terrain clearance of the initial segment must be maintained while inbound intermediate segment clearance is used. High ground around Reno results in an initial segment altitude of 9,000 feet and an intermediate segment of 8,500 feet for the ILS 16.

Initial segments are not required if the IF can be reached in the enroute environment. The IF marks the end of the initial segment and the beginning of the intermediate. On approaches that don’t have an IF, the intermediate segment begins once intercepting the final approach course. In Reno, this would be at completion of the procedure turn or intercepting the localizer from PYRAM IAF.

Go
With near ubiquitous radar, most approaches start outside the Final Approach Fix (FAF) via vectors. The FAF begins the final segment. While this segment is the bread and butter of instrument approaches, there is still a lot of confusion about it, including where it starts.

The FAF for most non-precision approaches is marked by a Maltese cross. Some non-precision approaches, such as the VOR 16R into Paine Field, don’t have an FAF at all. Here, the primary navaid, the VOR, is both the IAF and the missed approach point (MAP) and is located close to the field. The initial segment is a course outbound from the VOR with a procedure turn. Once established inbound the aircraft is on the final segment, which can be intercepted at various points. Therefore the location where the aircraft intercepts the final segment is called the Final Approach Point (FAP).

Confusion may arise from the co-charting of many ILS approaches with their no-glideslope LOC non-precision approach. Bozeman’s ILS or LOC RWY 12 is typical. A Maltese cross is required to identify the point on the LOC to start the decent. This is not required for an ILS because descent begins at glideslope intercept. The ILS16R into Reno has no such collocated LOC approach, and thus no Maltese cross.

The profile view on the BZN approach shows that the glideslope is below the 6,800 feet minimum altitude required at MANNI LOM for the LOC only approach. The confusion about FAFs on precision approaches has obscured the point of having an outer marker or substitute. Outer markers are part of ILS approaches to verify the correct glideslope and aircraft altimeter setting.
The outer marker is a powerful safety device when used correctly. When the bash, dash, space, dash starts sounding and the blue light flashes, it is time to verify that your altitude matches the chart to confirm you’re not on a false glideslope.

The term FAP is sometimes applied to where the glideslope is intercepted on an ILS. This is incorrect according to US standards. To add to the confusion though, it is correct terminology by ICAO standards. Fixes have a set two dimensional position. Points do not. The US interpretation is that intercepting a glideslope at a set altitude is a fix. The ICAO interpretation is that glide slope intercept is a point. The US has done a lot to standardize with ICAO, but for now that difference stands.

The final segment ends—sometimes—at the MAP or DH. If you’re landing, this visual portion remains part of the final segment. If the runway is not in sight, it is time to get out of there, beginning with—you guessed it—the MAP.

The missed approach segment takes everything in the first three segments and inverts it in one segment, leaving the pilot in a position to enter the enroute environment to bug out or to restart the approach for another bite at the apple. Although simple sounding, it is a complex process that’s fodder for a future article.

Every instrument approach is comprised of fixes, points, and segments. These are designed to get airplanes down from the enroute environment, get ready for the approach, and go to minimums. While it is not necessary to know everything about how approaches are designed, being familiar with the ingredients will improve reading, interpreting, and executing approaches.