Since Sony introduced the first commercial Lithium-Ion battery in a laptop computer in 1991, these batteries have grown to become the dominant power source for portable devices. They pack more energy per cubic inch than any other commonly available battery. However, the amount of stored energy can also create a huge problem if a catastrophic battery (cell) failure occurs.

Most failures are benign, such as aging/failure to hold a charge. Catastrophic battery failures are rare, estimated at one in ten million hours. However, because more devices are carried on aircraft, the probability of a catastrophic battery failure is higher. There were 373 Li-Ion incidents in aircraft reported to the FAA through June 1, 2022. Also, there were two fatal accidents, the latest in Dubai.

Many of these events were on bulk battery shipments in freight operations. However, several more recent incidents were related to e-cigarettes in various aircraft. The importance the FAA places on this issue can be seen by searching “Lithium Batteries” on the FAA website. There are a large number of reports on various Lithium battery safety topics.

If a catastrophic thermal runaway occurs in the cockpit in flight, it creates multiple problems. The amount of smoke and toxic fumes is a significant problem and there’s the obvious issue of a scorching flaming material—over 1100 degrees Fahrenheit—that can quickly ignite other materials in the vicinity. The consumed item is so hot you can’t pick it up without being severely burned. Tongs or heavily insulated asbestos-like gloves are required to move the object.

From personal experience, it is shocking how quickly a small business jet can fill with “smoke.” John Cox, CEO of Safety Operating Systems, showed a video at a National Business Aircraft Association education session of a cockpit going to zero visibility in less than 50 seconds due to smoke. At the same briefing, John discussed the UPS Boeing 747-400F fatal accident (Flight 006) in Dubai, where the smoke was so thick the crew couldn’t see to program the navigation system or change radio frequencies.

There are several ways that Li-ion batteries can be abused leading to a thermal runaway. Let’s examine those in some detail.

Due to the high cabin temperature possible in aircraft parked in open sun, pilots need to be aware of thermal abuse. According to the Fire Protection Research Foundation’s Lithium-Ion Batteries Hazard and Use Assessment report, a lithium-ion battery’s self-heating (beginning of a thermal runaway) starts at temperatures in the 158- to 194-degree Fahrenheit range.

However, if heat is allowed to escape, the time to thermal runaway could be longer, or the cell might never achieve thermal runaway. The time to thermal runaway will also be increased if the battery is not fully charged. UN and UL consumer electronics standards cover the Li-ion cells’ minimum thermal stability. These organizations require that fully charged cells withstand extended storage at 167 degrees Fahrenheit and short exposure of 10 minutes at 266 degrees F. IEEE Standards require that the cells withstand storage at 266 degrees F for one hour.

Most battery packs are composed of multiple cells connected in series to increase the voltage or in parallel to increase the current available, or both. If one cell in a pack undergoes a thermal runaway reaction, it is likely to cause thermal runaway in adjacent cells by various heat transfers. The modern battery packs have temperature sensors (PTC Thermistors) to reduce the current draw when in operation. The PTC safety device is designed to reduce the battery’s output current and consequently its temperature, but this safety device does not work with an external source of heat.

Mechanical abuse or damage to the battery can also lead to a thermal runaway. Quoting from the Research Foundations Assessment, “Mechanical abuse of cells can cause shorting between cell electrodes, leading to localized cell heating that propagates to the entire cell and initiates thermal runaway. The mechanical abuse can be severe and result in immediate failure, or it can be subtle and create a flaw in the cell that results in an internal cell fault much later (i.e., after the cell has undergone numerous cycles).”

Electrical abuse is typically due to shorting the contacts on spare (loose) batteries or using a non-approved charging device. You can also damage Li-ion batteries by charging them when the battery temperature is below freezing. Charging when the battery is below 32 degrees F leads to a metallic lithium plating on the anode. Manufacturing defects can arise if you try to bargain hunt and use third-party batteries with unknown manufacturing quality standards.

A study by Arizona State University and U.C. San Diego measuring an automobile dashboard temperature on a summer day in Phoenix found 157 degrees F with a maximum of 192 degrees F (Reference KTAR.com). The temperature inside an F-16 on the tarmac at Luke AFB (without cooling) can exceed 210 degrees Fahrenheit.

These daytime dashboard temperatures are approaching, or in, the self-heating temperature range listed above. But thankfully, even in the Valley of the Sun, the sun sets at night so you will not be heating the battery for two days straight.

What can you do to prevent a fire in-flight? The best thing to check is to feel the battery to see if it is hot. It is normal for the battery to feel warm, but it should never be too hot to touch. The second is to check if the battery is bulging or shows signs of swelling. Bulging can indicate internal mechanical damage causing the release of internal gases. Cells have a venting feature that in small devices such as cell phones can cause the battery to be blown off the phone. Also ask your passengers if they have any loose batteries in their baggage. Accidental shorting of the battery terminals can quickly overheat the battery. You have an advantage over the airline crews because you can check each device before the flight.

If there isn’t a checklist item for smoke removal, consult your aircraft manufacturer on their recommended smoke removal technique. Also, have a high-quality airtight fire containment bag on board that can accommodate your largest device. The bag is designed to contain not only the fire but also the heavy smoke. In addition, you will need thermal gloves or tongs to place the device in the bag. Plus, a smoke hood would be a good addition to your flight bag.

The FAA has an excellent training video for airline crews on how to fight a lithium battery fire. It can be found at https://medium.com/faa/fighting-fire-with-videos-30d59034a001. The FAA also has Advisory Circular AC 120-80A on In-Flight Fires. The FAA information was generated for Part 121 Airline Operators, but Part 91 Operators will also find the information beneficial and useful.

An in-flight fire is improbable, but if it occurs, it can easily cause panic. However, it is the time for action, not panic. As with every emergency, you must in sequence aviate, navigate, and communicate. In this situation, you must aviate, firefight, navigate, then communicate. It would be a great time to have a good, operating autopilot to allow you to firefight. Enlist your passenger(s) for help in containing the fire but don’t get distracted from flying the aircraft. 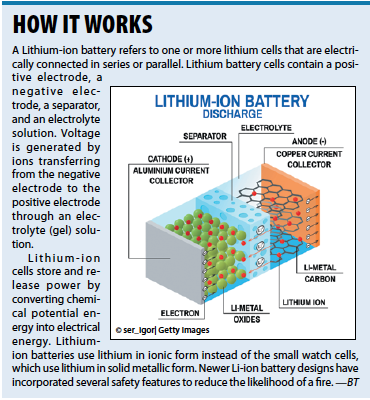 In many cases, but not all, the battery will emit a strong odor and smoke before erupting into a full-blown fire. That is the time to shut off the device the battery is powering, cool it off, and then put it into the fire containment bag. Airlines now carry fire/smoke containment bags which have been used successfully on numerous occasions.

The FAA’s original guidance was against these bags because they felt the containment/insulation would increase rather than decrease the thermal runaway process. Today the FAA recommends cooling the battery with water or any non-flammable liquid (soda, juice) to get the temperature below the thermal initiation point. Then, use the fire containment bag once the device can be handled safely. Other FAA guidance suggests a halogen fire extinguisher to douse any flames, then hit it with lots of water. Water is allowable because it is a chemical rather than an electrical fire. One fire containment bag manufacturer instructs the user to insert the battery into the bag and add water. Once you get it under control, Li-ion battery fires tend to reignite, so it is not the time to be bashful about declaring an emergency and getting the aircraft on the ground. All controllers will understand “Fire on board.”

Bob Teter is a retired CFI and a Commercial pilot with SEL, and MEL ratings. As an electrical engineer, he was involved in avionics development on automated flight controls, autothrottles, and flight management systems. Today he is a consultant and freelance aviation writer.