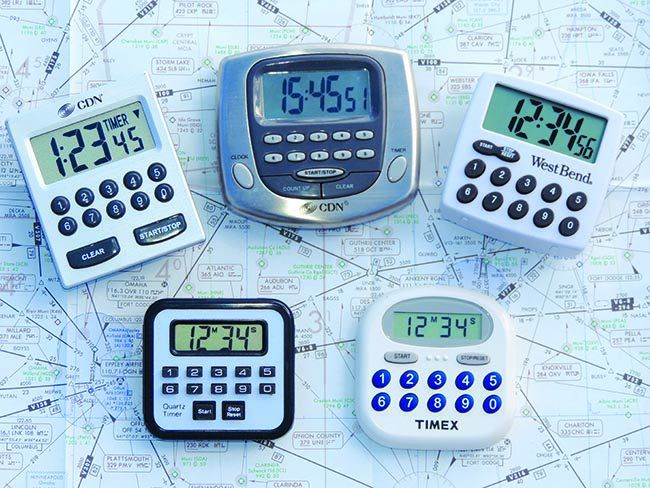 There were no GPS approaches when I learned instruments, so we timed everything. To do so, I purchased a simple Timex kitchen timer with direct entry via separate zero through nine buttons. Need to time 2:16? Push 2-1-6-start. I stopped using that trusty timer after a panel upgrade.

After needing a timer for a household task, I reflected on that Timex for aviation use. I decided to put it back in the plane for other timing needs: fuel tanks, turbo cool-down, descent power reductions, holds, etc. I might even time approaches.

I still needed a household timer so I went shopping. After visiting Target and Walmart, I gave up. In today’s “make it cheaper” world, buttons must be expensive and common timers no longer have direct entry. I felt a challenge coming on.

You probably have a timer function in another device, but it might be difficult to use. This suggests a dedicated timer, but panel space and cost often are prohibitive. So, kitchen timers are ideal.

Both ASA and Sporty’s have aviation-specific handheld timers with compelling feature sets. But, neither has direct entry.

After I couldn’t find what I wanted in a retail store, a web search was successful. Direct-entry timers are not common, but they exist. I picked a few candidates. (My trusty Timex was nowhere to be found.)

Most timers have a nice display and well-marked buttons. When the timer expires, all but the CDN TM30 have a chirping alarm that’s loud and penetrating, but quite high pitched and likely to be missed in cockpit din with noise-cancelling headsets. If the display is static at zero, I think this would be easy to miss.

The TM30 has a lower-pitched alarm that’s easier to hear, but probably still not enough in a noisy cockpit. Both CDN timers also blink the display when reaching zero. Plus, the TM30 allows you to select a beeping or vibrating alarm.

All the timers except the West Bend have varying implementations of an overrun timer. When the countdown timer reaches zero, the timer begins to count up to show you the amount of time since it reached zero. None seemed to me to be perfectly implemented, but this is a nice feature to know how much over your desired time you’ve gone.

The CDN TM23-S is the only one of these that can multitask—its countdown and count up timers are independent and there’s even a separate clock function (12- or 24-hour format). However, this requires a somewhat more involved operating logic that had me constantly pushing the wrong button. It’s not difficult to learn, but it’s not as straightforward as a single-function timer. Plus the markings on the number buttons are tiny.

I didn’t find the perfect timer. Each of these timers has something to like and something to gripe about. In working with each, though, I concluded that the one I’d most want in the cockpit is the CDN TM30 with its large digits, its lower-pitched alarm and the vibrate option. So, I now carry that in the airplane and use the old Timex for that recurring timing chore I have at home.