Home AVIONICS General Aviation News: July 2016
Print
Email
Facebook
Twitter
The Airbus Perlan Mission II team, which aims to fly a pressurized glider to a record altitude of 90,000 feet, has been continuing its flight-test program in Minden, Nevada, and plans to relocate to Argentina this summer. General aviation aircraft shipments declined 3.7 percent in the first quarter of this year, compared to the same period last year, according to the General Aviation Manufacturers Association. The U.S. Helicopter Safety Team, an industry-government partnership that launched in 2013, has set a goal of a 20-percent reduction of fatal civil helicopter accidents by 2019. The general-aviation industry has been lobbying for years for an overhaul of Part 23, to make it easier and faster to certify new airplanes and technology upgrades. Aero Electric Aircraft Corp. rolled out its solar-electric Sun Flyer airplane, a two-seat low-wing trainer, at Colorados Centennial Airport, in May.
To continue reading this article you must be a paid subscriber 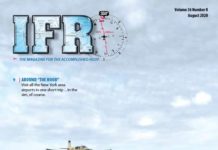