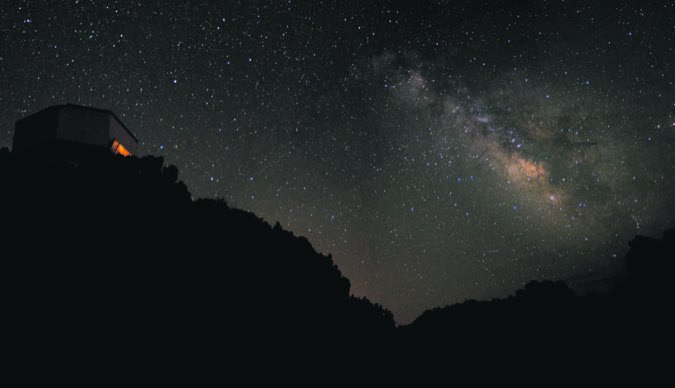 You’re on a straight-in visual. Although there’s not a cloud in the sky, you loaded the ILS for situational awareness. It’s early evening and the sun is blinding any attempt to look out the window. You transition to the gauges and fly the approach, intercepting the glideslope and keeping the crosshairs centered. You finally see the runway and land. The FAA has said we may log an instrument approach if we are in actual or simulated conditions inside the final approach fix. Were you?

In 1984, Joseph Carr asked FAA Legal some questions about logging instrument flight time. One was whether “a flight over the ocean on a moonless night without a discernible horizon could be logged as actual instrument flight time” even if the conditions qualify for VFR flight. The result was a formal legal interpretation by the FAA Chief Counsel, commonly called the “Moonless Night Letter.”

“Typically,” but not “always.” The Chief Counsel concluded, “actual instrument conditions may occur in the case you described, a moonless night over the ocean with no discernible horizon, if use of the instruments is necessary to maintain adequate control over the aircraft.”

Before 1997, the six-month rule for instrument currency in 61.57 also required six hours of instrument flight time. This may have originally prompted Mr. Carr, but discussions and questions about the Moonless Night Letter continue, which we’ll explore. They have not been addressed by the FAA, so we’ll speculate on the answers. You might have different opinions, and you might be right.

Consider two concepts. First, the Moonless Night Letter does not define “instrument meteorological conditions” (IMC). It defines “actual instrument flight conditions.” The two are not synonymous. The FAA defines IMC as conditions less than the requirements for VFR flight (see, for example, 14 CFR 170.3 and the Pilot/Controller Glossary).

The second concept is “adequate control of the aircraft.” To borrow two of the three oft-repeated trio of flight priorities, I’d say this refers to the ability to aviate, not the ability to navigate. The “aircraft instruments” referred to are the aircraft’s attitude instruments, not its navigation instruments. Put another way, the Moonless Night Letter permits us to log actual instrument time when outside conditions require us to use the instruments to keep the shiny side up. For example, a pilot flying on top of an overcast to a broken cloud deck, who has no difficulty flying level but needs to rely on some navaids to stay on course, is not in “actual.”

Currency in 61.57 isn’t the only instrument flight time requirement. Notably 61.65 requires 40 hours instrument flight time for the airplane instrument rating, only 20 of which must be dual with a CFII. Some of those are commonly flown under simulated conditions. Could our student forego the hood, find a desolate area on a moonless VFR night with high overcast, and build some of that time solo? Visibility might even be excellent, with another aircraft’s navigation and anticollision lights clearly visible 20 miles away. Putting the wisdom of that aside, the Moonless Night Letter presumes visual conditions qualifying for VFR, and there is nothing to suggest our student couldn’t log that.

If one accepts that the Moonless Night Letter refers to aviating, not navigating, when do outside conditions require instruments “to maintain adequate control over the aircraft”? There’s a lot of personal comfort, proficiency, and pilot discretion here. “The determination as to whether flight by reference to instruments is necessary is somewhat subjective, and based in part on the sound judgment of the pilot.” But the Letter adds, “The log should include the reasons for determining that the flight was under actual instrument conditions in case the pilot later would be called on to prove that the actual instrument flight time logged was legitimate.”

Most can agree on the “flight over the ocean on a moonless night without a discernible horizon.” Aviation texts and FAA handbooks and guidance describe a series of visual illusions that can lead to severe spatial disorientation. Among them are sloping cloud formations, a nighttime scene with little ability to differentiate ground lights and stars, and “black hole” approaches and departures. After that, reasonable opinions diverge.

Flying above a broken cloud deck? Unless the cloud formations are sloping, even a student pilot should be able to maintain control. Similarly, on my checkout in the Colorado Rockies I was asked to do steep turns in a valley surrounded by mountains. It was disorienting and I had to go to instruments. That was the point, but it certainly wasn’t “actual instrument flight conditions.”

Absent an IPC, 61.57 requires us to log six approaches and one hold in the last six calendar months. A reader asked if he could log a practice approach while in Moonless Night conditions. In the scenario, the pilot heads to a remote airport in a desolate area, “activating the airport lights only after passing the FAF.” I don’t think there’s an easy answer and my educated guess is a firm “maybe.” I don’t see a problem with natural phenomena such as the FAA-recognized “black hole” approach when there are no approach lights giving visual cues. But how would the FAA treat the decision to avoid turning on the lights? Is it “outside conditions?” Or is the pilot’s vision being “intentionally restricted” in a manner akin to simulated instrument flight?

If asked, the Chief Counsel, with the benefit of 33 years of 20/20 hindsight, might turn around and get rid of the concept altogether. Or, the FAA might make a distinction between “natural” conditions resulting from outside causes and “artificial” conditions created by the pilot. Or, they might say it doesn’t matter whether the conditions are natural or artificial, so long as the pilot (a) needs the flight instruments for aircraft control and (b) the pilot is not wearing a hood restricting the ability to see and avoid traffic.

We began with a scenario where the position of the sun makes seeing the runway impossible, so the pilot flies the approach to find the runway. Here, there’s no “natural” vs. “artificial” distinction; it’s the sun. But what about the aviate vs. navigate distinction? If some of the horizon is visible to the sides, is flying the approach required to maintain control of the aircraft or is it simply a navigational aid?

Ultimately, it’s a judgment call. As the Chief Counsel acknowledged, it is “somewhat subjective, and based in part on the sound judgment of the pilot.” One pilot in this situation might decide to log the approach; another might not. My best answer is borrowed from aviation writer Bob Gardner who once said, “You are the best judge of whether an approach has made you a more proficient instrument pilot or has just allowed you to fill a gap in your log.” That has always been my personal guide.

Fortunately, this discussion is an academic mental exercise for most of us. We no longer have a time requirement and Moonless Night conditions requiring an approach are uncommon. If you do encounter one, use your best judgment, but be prepared to justify it in the rare instance a question comes up.

Mark Kolber is a pilot and aviation lawyer who’s recently joined the IFR staff as the resident expert on regulatory edge cases.